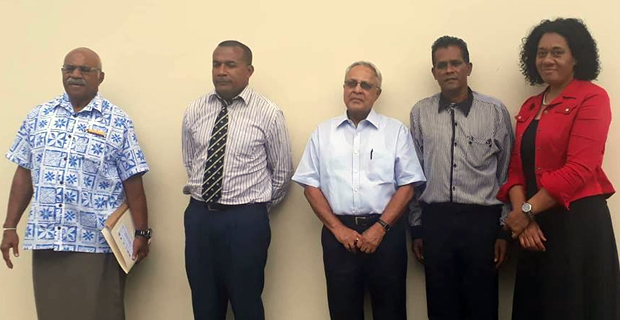 Representatives of five political parties at a joint press conference

The leaders of six registered political parties, Freedom Alliance, Fiji Labour Party, National Federation Party, Peoples Democratic Party, Social Democratic Liberal Party and Unity Fiji say they no longer have confidence in the independence, impartiality and credibility of the Chairman of the Electoral Commission Suresh Chandra and the Supervisor of Elections Mohammed Saneem.

In a joint press conference, they made it clear that they doubt the ability of the Chairman of the Electoral Commission and the Supervisor of Elections to deliver free, fair and credible elections for Fiji in 2018.

The parties have raised issues which they want the Supervisor of Elections to consider. Chaudhry then said that the election was rigged because a vote for the Fiji Labour Party at Saint Joseph’s Secondary School was not counted. NFP Vice President Seini Nabou says they have been told that the Electoral Commission is under no legal obligation to show the ballot papers.