SODELPA is again on a falsehood crusade on iTaukei Land – AG

SODELPA is again on a falsehood crusade on iTaukei Land – AG 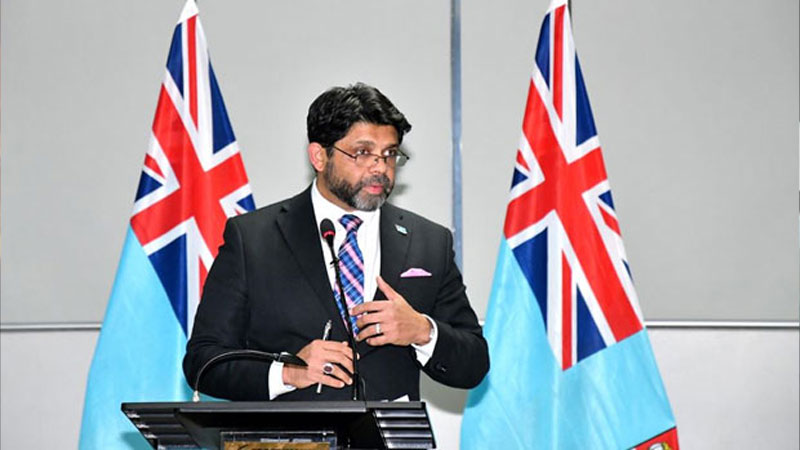 Attorney General, Aiyaz Sayed-Khaiyum says the Bill to amend the iTaukei Land Trust Act proposes that the consent of TLTB is no longer required for any mortgage, charge, pledge, caveat or for any court proceedings.

In a statement released on his facebook page, Sayed-Khaiyum says the iTaukei Land Trust (Budget Amendment) Bill 2021 proposes that except as may be otherwise provided by regulations made, it shall not be lawful for any lessee under this Act to alienate or deal with the land comprised in his or her lease or any part thereof, whether by sale, transfer or sublease or in any other manner whatsoever without the consent of the Board as lessor or head lessor first had and obtained.

He says the granting or withholding of consent shall be in the absolute discretion of the Board, and any sale, transfer, sublease or other unlawful alienation or dealing effected without such consent shall be null and void, provided that nothing in this section shall make it unlawful for the lessee of a residential or commercial lease granted before 29th September 1948 to mortgage such lease.

Sayed-Khaiyum says it also provides that for any other dealing which requires the consent of TLTB, consent can be refused by TLTB where there is breach of the lease condition or where the application is not in accordance with the law.

He says it is important to highlight that the removal of consent under the Bill only applies to leases which are properly issued by TLTB and which are registered with the Registrar of Titles. Sayed-Khaiyum says the registered proper leases are only issued by TLTB after necessary consents of the iTaukei landowning units are obtained and after terms and conditions such as rent and premium are prescribed by TLTB in a proper lease agreement.

He says the Bill does not apply to vakavanua and other ad hoc arrangements for occupation, which are not properly registered under the law.

The Attorney General says as announced in the 2021-2022 Annual Budget address, consents are no longer required for connecting water and electricity on any State and iTaukei leased land. He reiterates this only applies to registered leases.

Sayed-Khaiyum says an identical amendment has been proposed for all State Lands under the State Lands (Budget Amendment) Bill 2021, under which the consent of the Director of Lands will no longer be required for any mortgage, charge, pledge, caveat or for any court proceedings.

He says in her social media video, SODELPA MP, Lynda Tabuya has maliciously alleged that the Bill will result in landowners losing their rent payments, as well as losing control over their lands.

Sayed-Khaiyum says under section 4 of the Act, the control of all iTaukei land (unless the land owning decides to lease their land through the Land Use Act administered by the Lands Department) is vested with the TLTB and all such land is administered by TLTB for the benefit of the iTaukei landowners.

He says before any iTaukei land is leased by TLTB, the express consent of the iTaukei landowners is obtained.

Sayed-Khaiyum says following the consent of the iTaukei landowners, TLTB assesses the land value, the use of the land, the amount of premium and land rental, lease terms and conditions, including tenure.

He says once land is leased, the amount of premium and land rent to be paid is fixed and forms part of the lease, which is registered as a legally enforceable instrument with the Registrar of Titles. He further says any dealing with the lease does not in any way affect the land rent or premium which are to be paid by the lessees to TLTB for the benefit of the iTaukei landowners.

Sayed-Khaiyum says Tabuya’s statement that landowners would no longer enjoy the amount of money they receive if mortgages over leased iTaukei land no longer require the consent of TLTB is grossly misconstrued and is factually and legally incorrect.

He says it shows her ignorance of basic principles of land and property law.

He says a mortgage over any iTaukei lease will not and does not change the amount of lease monies which are currently received by TLTB on behalf of the landowning units.

The Attorney General says they will continue to receive lease monies in accordance with the lease, regardless of any mortgage on the lease.

He says it is totally absurd that Tabuya suggests that landowners will have no control over what a lessee can do with the landowners land if they no longer need consent for a mortgage.

Sayed-Khaiyum says iTaukei leases have been mortgaged well before this amendment was proposed, and none of these mortgages have taken away the control of TLTB over such leases.

He says even with the removal of the need for a consent to mortgage, lease monies will continue to be paid to the landowners and TLTB will continue to monitor and enforce the terms of the leases on all lessees.

The Attorney General says a mortgage, charge, pledge, caveat, nor connection to water and electricity does not in any way affect the terms and conditions of a lease approved by TLTB nor does it in any shape or form undermine the rights of the landowning units. He says in actual fact, TLTB still has full powers to forfeit any iTaukei lease if the lessee is found in breach of any terms and conditions of the lease whether or not there is a mortgage registered on that lease.

Sayed-Khaiyum says Section 28 of the Constitution clearly provides that ownership of all iTaukei land shall remain with the customary land owners of that land and iTaukei land shall not be permanently alienated except to the State for public purposes.

However, he says there is now a new provision in the Constitution that states if that if iTaukei land is used for public purpose and even though the state will pay compensation, the state must return that land to the landowners if it is no longer required for the original public purpose it was alienated for.

He also says the bureaucratic delays at TLTB and the legal costs incurred in obtaining consent have prohibited better utilization of and investment into iTaukei lands.

Sayed-Khaiyum says by removing the requirement for consent for mortgages and caveats, the Bill has the effect to making iTaukei leases much more marketable and attractive to take on lease, thereby conferring greater returns and benefit to iTaukei landowners.

Sayed-Khaiyum says those such as Rabuka have justified the permanent alienation of iTaukei lands in Denarau and Momi as a means to 'facilitate development'.

He says in other words what he is saying is that under the pretext of facilitating development he should be allowed to permanently alienate as much iTaukei land as possible.

Sayed-Khaiyum says this is completely contrary to the philosophy that communally held land has an intrinsic and intergenerational value that must be protected. He says the philosophy of the Bainimarama and subsequently FijiFirst governments has been that economic development can be faciliated, iTaukei land made more attractive for investment and made more valuable and all without permanently alienating the land.

He also says those who argue that there are currently no issues with TLTB’s operations under section 12, cannot possibly be true as numerous complaints are received from lessees and financial institutions on the delays they experience over their mortgage applications.

Sayed-Khaiyum says unfortunately, these delays are for weeks and months, thereby discouraging investment into iTaukei leases. He also says the long term strategy should be about how we can empower the landowners (who own 91% of all land in Fiji), make them wealthier, make their land more valuable and marketable and contribute to growing the Fijian economy.

The Attorney General says we see that SODELPA is again on a falsehood crusade.

He says despite the law being so clear that only administrative matters are being amended, without ownership and rights of landowners being affected, SODELPA is blatantly misreading the amendment, spreading false information, conjuring ill feelings and creating community discord.

Sayed-Khaiyum says contrary to the malicious, factually and legally flawed allegations by Tabuya, Gavoka and others, the Bill fully protects the proprietary interest and benefit of iTaukei landowners and does not pose any risk to the ownership of iTaukei lands as enshrined in the Fijian Constitution.

He says it is strongly recommended all citizens strongly support the Bill and vehemently condemn the factually and legally flawed attempts by the Opposition and others to undermine the Bill.