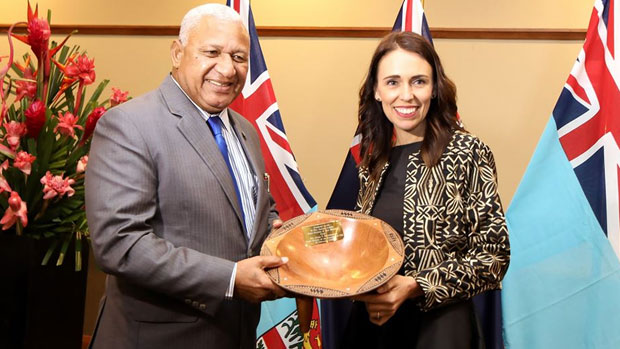 Prime Minister Voreqe Bainimarama says the visit by New Zealand’s Prime Minister Jacinda Ardern is about celebrating the rich and enduring friendship between Fijians and Kiwis.

While speaking at the State Dinner for Ardern last night, Bainimarama says Ardern is a leader who listened and he means it, adding in the Pacific spirit of Talanoa, they value that trait in anyone.

He says the respect she has shown for our way of life, and her sincere empathy for our suffering through a changing climate, will not be forgotten.

Bainimarama says through her interactions with Pacific Island leaders at last year’s forum in Funafuti, New Zealand’s genuine desire for a renewed and strengthened connection among our regional family was clear.

Meanwhile, New Zealand’s Prime Minister Jacinda Ardern says in her view the Fiji-New Zealand relationship is warmer, stronger and more productive than it has ever been.

Ardern says they are friends and natural partners, have a relationship based on mutual respect and shared values and yet – we can go further. She says the strong ties we share make New Zealand and Fiji natural partners.

Ardern says New Zealand greatly valued Fiji’s friendship and support following ‪the 15th March‬ terrorist attack last year adding Fiji was one of the first countries to reach out and express its condolences and solidarity, which meant so much to them.

She says Fiji reached out, all the while carrying its own loss as three Fijians were among the 51 innocent people who lost their lives ‪on March 15.‬ ‪

She also shared a tragic story of a Fijian woman she met in Christchurch the day after the attacks.‬

Ardern says similarly when Fiji has been hit by cyclones and natural disasters, New Zealand has done what they could.

She adds following Tropical Cyclones Sarai and Tino this year, New Zealand supported the deployment of personnel, water and food to Fiji’s isolated Lau group adding previously, they provided support for Fiji’s response to and recovery from the devastation caused by Tropical Cyclone Winston.

She says Fiji is New Zealand’s most important trading partner in the Pacific, and their 19th largest globally adding thy enjoy more than $1 billion in diverse, two-way trade.

The NZ Prime Minister says they see potential to further grow the trade and investment relationship.

Ardern says she is pleased they will be partnering with Fiji to support their ambitious programme of economic reforms.