In it's first 100 days in Govt, PA will present a mini budget, start prep for local govt elections, pay USP grant and repeal laws like women having to change their birth cert if they want to use their married name - Rabuka

In it's first 100 days in Govt, PA will present a mini budget, start prep for local govt elections, pay USP grant and repeal laws like women having to change their birth cert if they want to use their married name - Rabuka 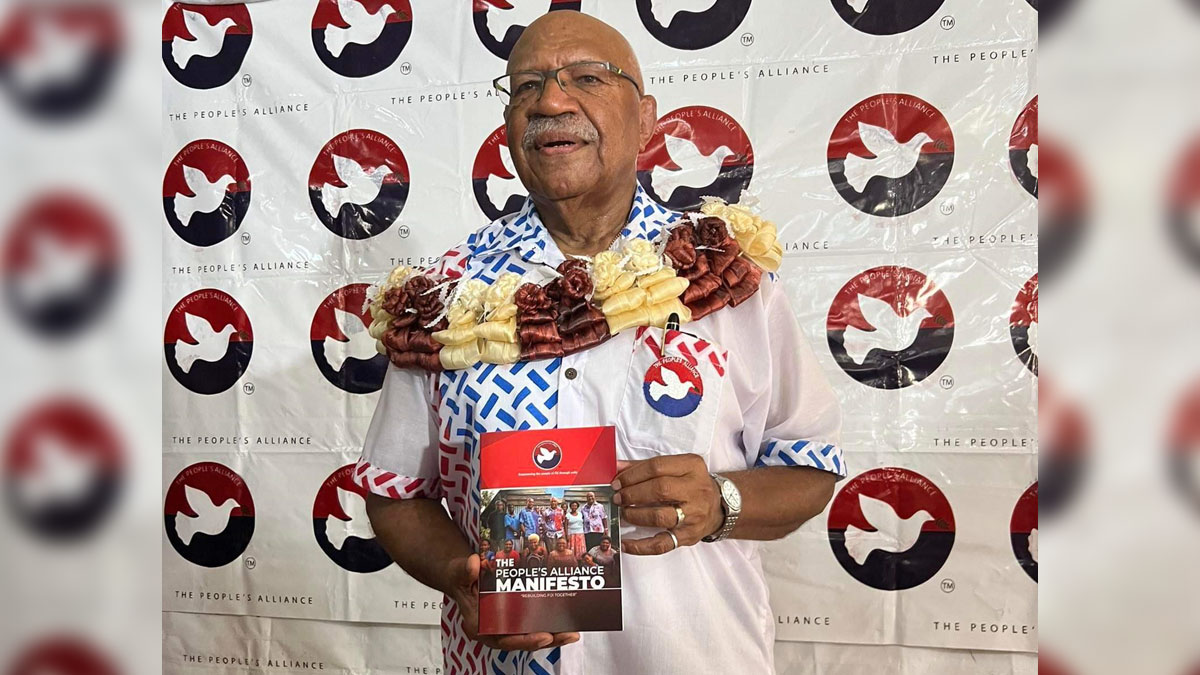 The People’s Alliance in the first 100 days in government aims to present a mini budget to implement the party’s priorities, form a Truth and Reconciliation Commission to heal the pains and scars left by the coups, prepare to hold local government elections within 12 months, phase out FICAC, increase the civil service retirement age to 60, commence payment of USP grant and review the baseline tariffs of both water and electricity.

According to their manifesto in the first 100 days they aim to remove laws and decrees that undermine human rights, media freedom, freedom of association, individual and group rights and review the current public holidays, review all travel bans and declarations of prohibited immigrants.

They say in the first 100 days preparatory work for the Local Government elections shall be initiated to ensure elections within 12 months and repeal the new law where women have to change their birth certificate to include their husband's name if they want to use their married name on their Voter ID card or other official identification.

The People's Alliance will also re-structure the judiciary to ensure speedy delivery of justice, phase out FICAC and incorporate the functions to the relevant existing agencies.

While speaking at the launch of the manifesto in Namoli Village in Lautoka today, People's Alliance Leader, Sitiveni Rabuka says with their coalition friends the National Federation Party, they will, within the first 100 days in office, organise a grand assembly involving Fijians from all walks of life and political persuasions to talk about the manifesto.

Rabuka says their manifesto will be debated and discussed, with the aim of gathering further ideas for improving policies and taking on new proposals.

He says they will encourage the citizenry to come forward with their thoughts for raising up Fiji and their contributions approved by the assembly will be incorporated into the manifesto.

Rabuka says results of the deliberations will be distributed widely among the people to give them a sense of ownership as they want them to understand that those in government are not their masters but their servants.

He further says the national assembly will complement the specialist reviews in four key areas including constitution and legal reform, economy, defence and national security and a forensic examination of the spending of the FijiFirst government during its 16 years of governance.

The former Prime Minister says they have no illusions about the magnitude of the problem of cleaning up the mess left by the FijiFirst government.

He says the FijiFirst government has left the economy and parts of our society in tatters.

The party’s manifesto states that they will present a mini budget to implement People’s Alliance party priorities and commitments through reallocation/redeployment of funds from the current financial year budget in the first 100 days in Government.

They say they will also convene a National Economic Summit to consult with all stakeholders and development partners, continue and consider price control on basic needs food items and review the current zero-rated VAT on basic food items.

Under the party’s Doctrine of Love, they also aim to form a Truth and Reconciliation Commission to heal the pains and scars left by the events of 1987, 2000 and 2006 in the first 100 days.

It says they will review the Standing Orders such as Parliamentary Standing Order 51 for clarity and to ensure transparency and accountability, review and the realignment of remuneration and associated allowance for all Parliamentarians, appointment of Speaker and Deputy Speaker in Parliament shall be reviewed, and the Select Committee Chairmanships will be reviewed - for example, the Public Accounts Committee Chair will be the Leader of Opposition.

They party says they will also review laws that marginalise iTaukei rights, remove the current government bylaws for villages and strengthen the existing legislation as stipulated in the iTaukei Affairs Act, reinstate the Great Council of Chiefs to facilitate the voices and intent of the iTaukei traditional leadership and administration, institutional review of the TLTB role and the Land Bank and removal of the Soli ni Yasana (to be funded from redeployment/reallocation from the existing budget).

According to their 100 day plan, they aim to reinstate the Higher Salaries Commission, remove short term contracts for all public servants, establish a full review of the civil service to implement a transparent and accountable merit based system, increase the retirement age to 60 years, terminate and re-advertise existing contracts of all Permanent Secretaries Chief Executive Officer positions and review all statutory and government commercial company boards to ensure transparency and accountability.

They aim to replace the Tertiary Loan Scheme and National Toppers Scholarships with full scholarships with bond conditions, which shall be funded from the existing allocation of $162.6 million, immediately establish an Education Commission to review the entire education system in the country that shall recommend improvement in the quality of teaching and leadership of the school system.

The party says the Education Commission shall also review the curriculum and/or suggest processes to do so and commence payment of USP grant.

It further says the shortage of skills and other shortfalls in the health sector will be addressed through additional budgetary provisions, basic health services will be given urgent attention and an additional $30 million will be reallocated to health services through a redeployment/ reallocation exercise.

The People’s Alliance says they will also review the baseline tariffs of both water and electricity.