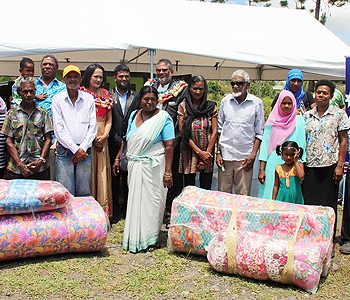 80‑year‑old Ram Badan’s prayers have finally been answered as he no longer has to live under the Ba bridge.

He has been homeless for the last seven years and had no option but to reside under the Ba Bridge.

Now, he has got a new home which has been made possible through the Muslim Aid Australia International.

Badan says he did not have anywhere to go so he lived under the bridge.

The elderly man says that he was also assisted by the social welfare assistance and with the new home, this assistance will go a long way in enabling him to live a dignified life.

Meanwhile, the Fijian Government has commended the Muslim Aid Australia International for its wide assistance provided towards the rebuilding of lives of families affected by Cyclone Winston.

The Muslim Aid Australia International started working in Fiji through five major development programs and in doing so the organisation has spent over $1.5 million.

The programs in areas of education, housing, food aid, emergency relief and sustainable development have benefited over 4,000 Fijians.

As part of the housing assistance, MAA International has also spent over $292,454 in rebuilding of over 50 homes for families who lost all their belongings in cyclone Winston.

40 new modular homes have been built in the Clopcott settlement in Ba.

Charity homes have also been built in areas of Ra and Nadi.

Minister for Health and Medical Services, Rosy Akbar presented the beneficiaries the keys for their new homes in Ba yesterday.

Director MAA International Projects, Saed Khan says all the projects are based on the principles of professionalism, best practices to assist the most needy communities, regardless of race or nationality.

He adds that they assisted 65 students with scholarships for tertiary education and they have spent about $315,000 in this education project.

Khan says in terms of assistance during emergency after TC Winston, they have distributed 33 tonnes of food rations benefiting the local economy at the time when it was needed.