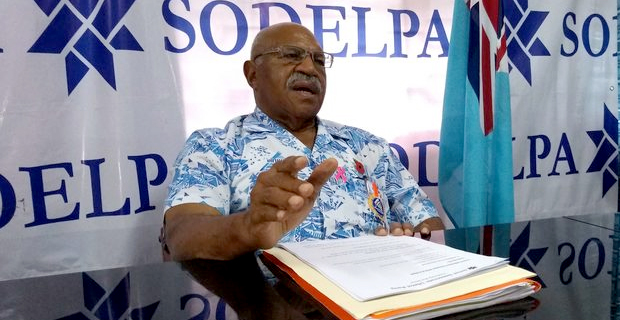 SODELPA Leader, Sitiveni Rabuka claims that the Fijian economy is in crisis, and he does not believe what is being said by the Minister for Economy or the Reserve Bank of Fiji.

Rabuka says it is so sad that independent institutions such as the RBF continue to support Government’s view that the economy is buoyant.

He also says the latest announcement by the Minister for Education in the reduction of education grants to schools and the delay of its payment is what he claims a clear testimony that government has a cash flow problem.

Rabuka also says that the release of the Fiji Sugar Corporation Annual Report last week clearly indicate that it made a financial loss of $80 million in the 2019 financial year. He also says the total FSC debt is hovering around $300 million which will be very difficult to manage taking into account the current trading environment.

The SODELPA Leader also says the rise in prices of basic food items and increased revenue measures and fees and charges, two months after the budget announcement which reduced expenditure by a whopping $809 million is a clear sign of desperation.

Rabuka goes on to say in his statement that the reduction of $809 million in government expenditure simply means that the economy will contract by at least $1.6 billion with the conservative multiplier effect of 0.2 which Fiji really cannot afford at this time.

He also claims that some institutions are favouring the Prime Minister when it comes to law and order issues.

Rabuka claims that despite the claim of buoyant levels of liquidity, commercial banks have increased the interest rate on loans twice in the last four months alone. The Reserve Bank of Fiji says domestic sectoral performance to-date remains largely mixed due to increases and decreases in different sectors in the economy.

The RBF says that visitor arrivals rose by 4.4 percent in the year to August due to higher arrivals from the United States, New Zealand, Japan, Australia, and Pacific Island Countries.

The RBF says cane and sugar outputs declined in the first fifteen weeks of crushing but are expected to surpass last year’s production levels for the entire season.

It also states that consumption activity slowed further as revealed by the latest partial indicators.

Cumulative to August, the RBF says new lending by commercial banks for consumption purposes fell slightly owing to lower lending to private individuals which more-than-offset the marginal growth in lending to the wholesale, retail, hotels and restaurants sector.

Registrations of new and second-hand vehicles also fell in the same period.

However net Value Added Tax collections grew on the back of lower VAT refunds and marginal growth in domestic VAT in the year to August.

The Reserve Bank of Fiji also states investment activity continues to weaken. The RBF says that commercial banks’ new investment lending fell cumulative to August, due to a decline in lending to both real estate and building and construction sectors.
The Reserve Bank also states that in the second quarter, the value of building permits and completion certificates issued declined by 12.6 percent and 41.1 percent, respectively suggesting a slowdown in construction activity.

The RBF says labour market conditions remain weak as portrayed by the RBF’s Job Advertisements Survey. The total number of vacancies advertised declined by an annual 2.7 percent in the year to August, led by lower recruitment intentions in the community, social and personal services; transport, storage and communication; electricity and water; and the mining and quarrying sectors.

The Reserve Bank of Fiji states that the banking system liquidity increased in August by 21.9% to $617.7 million, on account of an increase in foreign reserves which more-than-offset the increase in currency in circulation deposits and statutory reserve.

The RBF states that as of 27th September, liquidity stood at $628.2 million.

The RBF also says that in the year to June, total exports (excluding aircraft) rose by 2.1 percent largely underpinned by growth in re-exports, while domestic exports declined mainly due to lower exports of woodchips; gold; soft drinks; animal and vegetable oils and fats; bauxite; and chemicals.

Tourism earnings grew by 6.8 percent to total $895.4 million in the year to June 2019, compared to a 4.6 percent growth in the same period in 2018. Cumulative to August 2019, inward remittances grew by 6.2 percent to total $399.7 million, compared to the 10.6 percent growth in the corresponding period last year. The growth in inward remittances was largely driven by gifts, maintenance & donations in the review period.

Annual inflation in August stood at 1.2 percent, slightly higher than the 0.7 percent in July but significantly lower than the 4.3 percent registered in August last year.

The year-end inflation rate is now forecast at 2.0 percent. The Chairman of the Association of Banks, Rakesh Ram says interest rates have been the lowest in Fiji in the last 10 years.

Ram says commercial banks have not increased lending rates in the last 10 years.

However, Ram says given the increase in cost of funds and in recognition that interest rates have not increased in the last 10 years, individual banks have increased interest rates this year and this has been informed to customers by the various banks.

The increase in lending interest rates has been around 0.5 to 1.25 percent. Minister for Education, Rosy Akbar says schools will need to seek permission first from the Ministry before embarking on any fundraising initiatives.

As highlighted by Fijivillage, the Education Ministry says the school fundraising policy has been in place for several years and permission for fundraising will be given in special circumstances and is usually requested by schools for infrastructure development.

Akbar has noted that there have been some inaccuracies reported in some media in relation to the consultation process with school heads and school management on the free education grant held recently.

She says some of the information considered by the Ministry include one fundraising event per year, learning and teaching time must not be compromised, there is full transparency and accountability and no financial target is set for any student to raise.

Akbar says this is to ensure that no parent or student is effectively levied. Funds raised by the school are paid into the school’s bank account.

The Minister for Education says for the 2019 to 2020 financial year, there is a slight reduction. Akbar says this is in recognition that, over the years through the budgetary allocation, the Ministry has taken over some of the expenditure through its own operational budget that was initially allocated to schools from the free education grant.

She says an example is text books which from the 2018-2019 budget, has been met by the Ministry.

The FEG was introduced in 2014 and the budget allocations to date are:

Since 2014, the free education grant allocated to schools amounts to $425 million.

The grant covers the operational costs of the school.

Clark says this was impacted by weather conditions and reduced world sugar prices.

He says that on the positive side they addressed technical issues that worried them last year and their factories are running much better.

Clark adds they have been blessed with very good weather this year and hopes the cane farmers have taken advantage of it.

He also stresses that he would also like a reduction in the burning of cane.

FSC is also dealing with the misleading report which says that FSC had made $80 million operating loss.