Rick Owens on Corrupting the Classics

Rick Owens on Corrupting the Classics 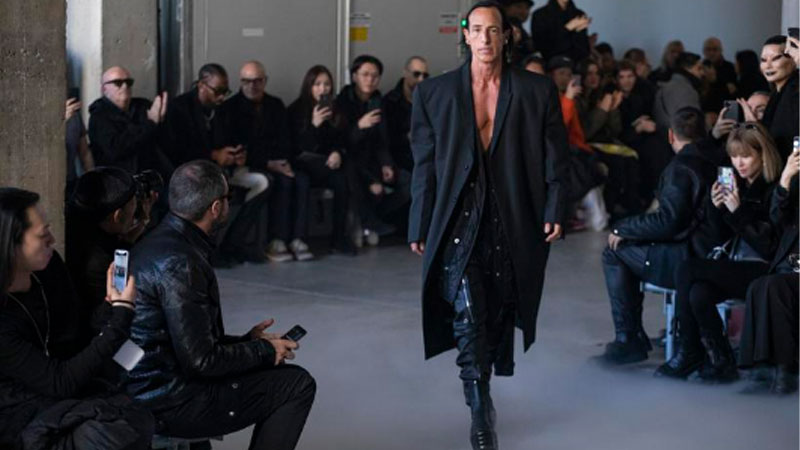 A model presents a look at the Rick Owens mens’ fall 2020 fashion show in Paris, Jan. 16, 2019. By now, Rick Owens has “corrupted,” as he puts it, several iconic shoe brands, breathing his weirdness into the safe and reliable designs of Birkenstock,

By now, Rick Owens has “corrupted,” as he puts it, several iconic shoe brands, breathing his weirdness into the safe and reliable designs of Birkenstock, Dr. Martens, Adidas and Converse. But one man’s corruption is another brand’s highly marketable collaboration, and Owens has grown to appreciate these partnerships.

He used to roll his eyes at them until he learned, after years of working in isolation, that collaborations are “a great way to meet new people,” he said. He seems, now, to be having a lot of fun.

“Being able to corrupt something pure like that is kind of delicious,” he said. “And when I say corrupt, I’m saying that affectionately. I’m tweaking something they have that exists and re-proportioning things. It is not corrupting in a malicious way. It is teasing.”

Last week, Owens announced his second collaboration with Converse: TURBOWPN, his take on its Weapon sneaker, originally released in 1986. (His first collaboration, the TURBODRK Chuck 70, which added a pentagram and sharp square toe, among other things, to the classic Chuck Taylor All Star, was introduced during his menswear runway show in Venice in January.)

Here, Owens explains how he approaches each new “corruption,” his love for the Ramones and the kind of collaboration he’ll never do. This interview, originally conducted on Instagram, has been edited and condensed.

For something like this, where do you start? By just completely deconstructing whatever item you’re working on?

I start by asking them, “What are your limits?” I don’t want to spend a lot of time pursuing this idea if I find out that this mold is going to cost 10 million euros. I need to know the technical limitations and legal limitations. What can I distort legally, and what is too far?

I like distorting things architecturally, in a more profound way than adding a print or a decoration on top. I like to disturb the very foundation of the product they’re doing.

A lot of the products you distort are very recognizable, iconic pieces. With Converse, did you have any kind of emotional attachment? Did you wear Chuck Taylors when you were a kid?

I wasn’t cool enough when I was a kid.

I kind of doubt that.

No, no, of course I did. We all did. Everybody that wanted to look like the Ramones. And the Ramones were my style idols. They still are, kind of. I associate Converse very much with the Ramones, and that’s what makes Converse seem like kind of a scrappy outsider symbol to a lot of people.

Their look was so approachable. Some of the guys were kind of cute — they weren’t the prettiest guys, but they had the right hair, they had the right skinniness, they had the right languor, they had an element of danger. And the music was very cartoonish. The lyrics are very simple but simple in such an ikebana perfect Japanese floral arrangement kind of way — like a haiku. They’re like a punk haiku.

You’ve been inspired by the Ramones for a really long time.

There are certain things in place when you come into creative bloom, when you’re at the age where you start recognizing what it is you’re attracted to, creatively, that sticks with you for your entire life.

We all have a mood board in our heads of everything that started affecting us aesthetically at a certain point. And the Ramones were very much part of that, when I started collecting all of my amulets and symbols and ideas that were going to come together to be my personal little religion.

But I’m very conscious of not staying in the past. I’m always searching for the new Ramones. When I see music now, I’m thinking: “You guys aren’t shocking me enough. I want you to punch me in the face.”

At your last show in January, you put your new Chuck Taylors on the runway, right alongside those huge, thigh-high, thick leather boots. They’re kind of different looks. What for you is the connective tissue between those shoes?

I distorted those sneakers to have the same toe cap as my platform boots, so I architecturally aligned them. But besides that, they are both symbols of youthful rebellion from the past.

If I’m thinking of the Ramones as being from the ’70s CBGB, I’m also thinking of platform boots from one of my other favorite bands, Kiss. So Kiss and the Ramones, they’re totally in the same world to me. That kind of flamboyance and breathlessness and search for adventure, I think that’s how it fits into my world — or into what I was trying to do with that show.

In a partnership or collaboration, is there something that is, like, an absolute “no” for you?

I don’t like cheapness. For instance, when designers were doing H&M and Zara, and I don’t mean to be rude, but I felt like that was a disappointment.

When it is about brands that are doing fast disposable clothing, that disturbs me, and I would stay away from that because disposability is what’s wrong with our world today.

Somebody could very well say, you know, inexpensive things that I’ve done with these collaborations are disposable, too. But these are kind of iconic designs that are beyond disposability. Some of these bigger fast brands, they are disposing of ideas in such a voracious way. That is everything that I’m trying not to do.

So yeah, there are some companies I would really avoid. But not to worry, they’re not calling me anyway.