A Glut of Chinese Masks Are Driving U.S. Companies Out of Business

A Glut of Chinese Masks Are Driving U.S. Companies Out of Business 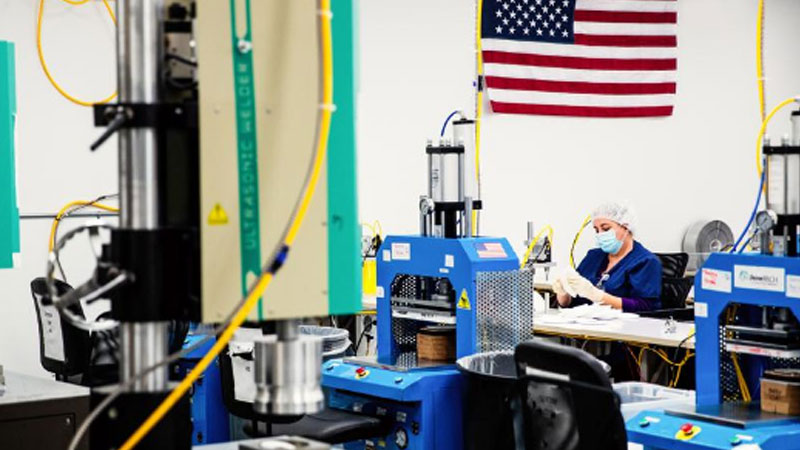 Mask mandates have eased, a welcome milestone in the battle against COVID-19. But for the two dozen domestic companies that jumped into the mask-making business last year, the good news comes with a downside: a calamitous drop in sales.

Some of the slackening demand is tied to the loosening of masking guidelines by the Centers for Disease Control and Prevention, but industry experts say a bigger factor has been the return of inexpensive protective gear from China that began flooding the U.S. market earlier this year.

Industry executives and some members of Congress have accused China of dumping, noting that many imports are priced so low — sometimes one-tenth of what U.S. factories charge for comparable products — that there is little chance for domestic companies to survive.

In recent weeks, at least three companies have stopped producing masks and medical gowns, and several others have markedly scaled back production — among them Premium-PPE, a year-old surgical mask-maker in Virginia that recently laid off most of its 280 workers.

“Our industry is in break-glass mode,” said Brent Dillie, co-owner of the company.

Like other startups, the company got into the mask business after China, the world’s largest producer of protective medical gear, halted exports at the start of the pandemic.

“Six months from now, many of us won’t be around," said Dillie, "and that won’t be good for America the next time there’s a national health emergency.”

The crisis faced by domestic producers is an urgent test for the Biden administration and embodies two of its most important priorities: shore up U.S. manufacturing and ensure that health care workers will never again scramble to find adequate protective gear. Those shortages, health experts say, most likely contributed to the high rates of infection among front-line workers, more than 3,600 of whom died of COVID-19 during the first year of the pandemic, according to a tally by The Guardian and Kaiser Health News.

The White House has announced a few measures aimed at buoying domestic producers of personal protective equipment, but industry executives say they are still awaiting more substantial trade policies and supply-chain reforms that would bolster their companies’ chances of survival.

Tim Manning, the White House COVID-19 supply coordinator, said the administration has tried to address some of the industry’s challenges: They have pushed federal agencies to procure domestic supplies, and they have introduced startups to the distribution giants that supply the nation’s hospital chains. The administration, he said, was also poised in the coming months to allocate billions of dollars in federal relief spending that would replenish the Strategic National Stockpile with U.S.-made medical goods.

“The scale and scope of these efforts is something we’re still working through,” Manning said in an interview.

In Congress, a bill with bipartisan support would allocate $500 million in annual spending over the next three years to support domestic manufacturers of vital medical equipment.

While industry executives commend these moves, they say that time is running out. The American Mask Manufacturer's Association, a recently created trade group, said its 27 members had already laid off 50% of their workforce. Without concerted action from Washington, most of those companies will go belly up within the next two months.

An immediate boost, they say, would be to rescind the CDC guidelines, born during the pandemic, that force health workers to repeatedly reuse N95 masks, even though they are designed to be thrown away after contact with each patient. Many hospitals are still following the guidelines, despite the 260 million masks gathering dust in warehouses across the country.

“We’re not looking for infinite support from the government,” said Lloyd Armbrust, the association’s president and the founder and chief executive of Armbrust American, a mask-making company in Texas. “We need the government’s support right now because unfair pressure from China is going to kill this new industry before the legislators even get a chance to fix the problem.”

The association is planning to file an unfair trade complaint with the World Trade Organization, claiming that much of the protective gear imported from China is selling for less than the cost of production. The price for some Chinese-made surgical masks has recently dropped to as low as 1 cent, compared with about 10 to 15 cents for U.S. masks that use domestically produced raw material.

“This is full-on economic warfare,” said Luis Arguello Jr., vice president of DemeTech, a medical suture company in Florida that earlier this month laid off 1,500 workers who made surgical masks.

He said that in the coming weeks, 500 other workers who make N95 masks would also likely be let go.

“China is on the mission to make sure no one in the industry survives, and so far they’re winning,” Arguello said.

The Chinese Embassy in Washington did not respond to requests for comment.

The International Trade Administration, a division of the Commerce Department, declined to say whether it would support an anti-competitive complaint against China. The agency, a spokesperson said in a statement, “continues to monitor market trends closely and assess options to ensure American manufacturers are competing on a level playing field.”

The Office of U.S. Trade Representative, which makes trade policy recommendations to the president, did not respond to interview requests.