War on drugs continues after the seizure of $539.58 million worth of marijuana in Kadavu

War on drugs continues after the seizure of $539.58 million worth of marijuana in Kadavu 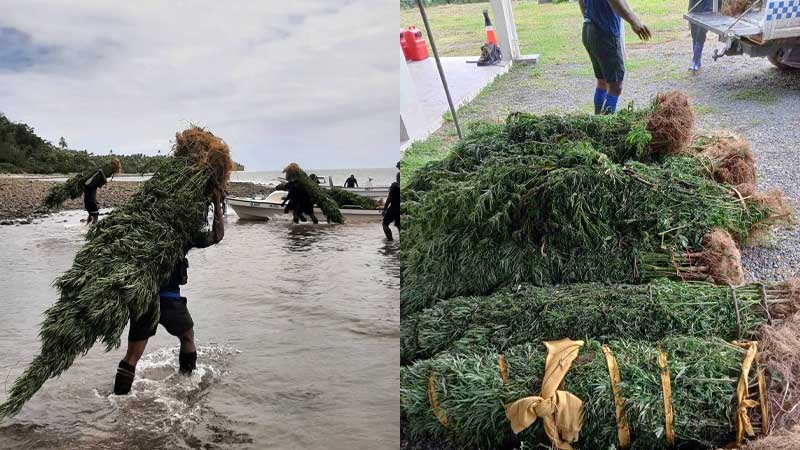 The war on drugs continues in the country as Police gather information on the alleged cultivation and manufacturing of illegal drugs.

Over the past few weeks, Police have seized 29,977 marijuana plants with a maturity value of $539.58 million from 27 farms in Kadavu.

Most of these raids are happening in the upper areas of Nakasaleka and Naceva.

Two of the men, a 35-year-old and a 40-year-old were arrested following raids conducted in Nakasaleka.

They have been bailed and will reappear in the Suva Magistrates Court on 11th October.

The third accused has been bailed and his case has been transferred to the Suva High Court and will be called again on November 1st.

His case was transferred to the High Court due to the amount of drugs allegedly seized from his farm which weighed 398 kilograms.

The raid was conducted at Gasele Village where more than 2,800 plants were seized from the farm allegedly belonging to the 44-year-old man.

Police Commissioner Sitiveni Qiliho says operations are not solely focused in one area as the raids are conducted throughout the division as officers are equipped with technological aid to assist with the quick identification of the drugs which in the past consumed a lot of time.

Qiliho says drug operations also take time as all information gathered needs to be verified before a raid is conducted particularly with white drugs.

He says the sharing of information from members of the public has greatly assisted the efforts and the protection of sources is taken seriously.

The Commissioner also stresses any officer who is involved in the unauthorized release of information that could be detrimental to ongoing efforts will be dealt with through the internal disciplinary measures.