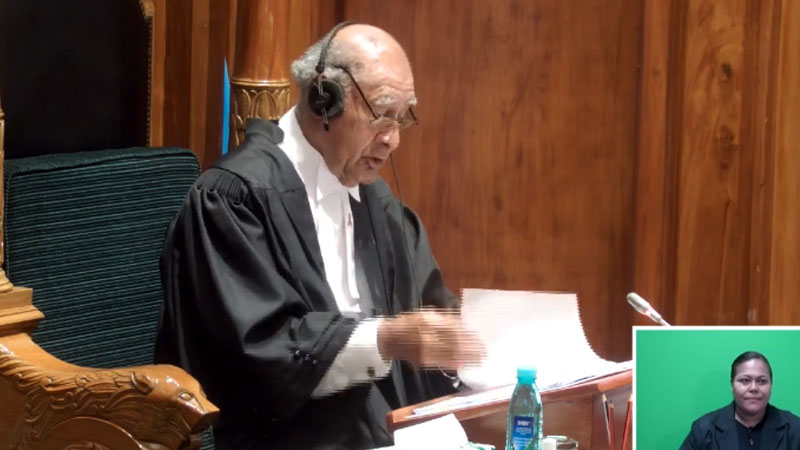 Speaker of Parliament, Ratu Epeli Nailatikau has today said that three opposition petitions cannot be tabled in parliament as they do not meet the parliament’s petition standards and the requirements of the standing orders.

Two petitions were tabled by SODELPA MP, Lynda Tabuya. One was in relation to Grace Road Church and its activities in Fiji and the other was to look into the issue of domestic violence in Fiji.

The third petition was tabled by Opposition Leader, Sitiveni Rabuka which wanted an inquiry into voter card renewal requirements and the ban on the use of married names for women.

He added that Tabuya had said that Grace Road Church is founded on hate and that the founder had allegedly physically assaulted her followers and promoted racism in her sermons.

He says Tabuya had said that in the instance, where their claims are validated, they demand that Grace Road Church and the Korean employees of the Church be repatriated to South Korea.

Ratu Epeli further says this petition clearly requests for an action which is not within the powers of parliament to take as it demands upon the validation of the implied claims of assault and racism, members of the church be repatriated to Korea.

He adds that the Constitution states that every person who is not a citizen but is lawfully in the country has the right not to be expelled from Fiji except pursuant to an order from the court or a decision by the Minister of Immigration on a ground prescribed by law.

He says furthermore in relation to the claims of assault and racism, he notes that assault is already prohibited in the Crimes Act of 2009 and indicating, inciting racial antagonism is prohibited in the Public Order Act 1969.

He says as such it is the responsibility of Police working with interested and/or aggrieved parties to investigate and lay charges where ever adding these are the mechanism the legislature has already set out to address these issues.

Ratu Epeli says it is not an action which parliament itself then may take.

While giving his ruling on the petition by Rabuka where he had called that the Standing Committee on Justice Law and Human Rights to conduct a holistic inquiry into the new requirements for birth certificates to renew Voter ID cards, and ban on married women to use their husbands name unless changed by a deed poll, with a view to protect the interest and the right to vote for all citizen, poor or rich, man and woman, Ratu Epeli says that he has scrutinized the petition to ensure that it requests for a clear action for parliament to take and such actions lies within the parliament to take.

The Speaker ruled that the petition does not request for a clear action for parliament to take and it does not refer to matters which are the responsibility of the parliament.

He says the constitution also entrenches these matters as the responsibility of the electoral commission.

He says the Domestic Violence Act 2009 has set out a legal framework to address domestic violence in Fiji. Ratu Epeli says Government has also sought to address this issue through the Ministry of Women, Children and Poverty Alleviation.

The Fiji Revenue and Customs Service Acting CEO, Fane Vave confirms the screenshot of an email which is allegedly talking about overstating of governm... 26 minutes ago
LATEST NEWS