Legal Practitioners Unit will not disclose details of any investigations - Liyanage

Legal Practitioners Unit will not disclose details of any investigations - Liyanage 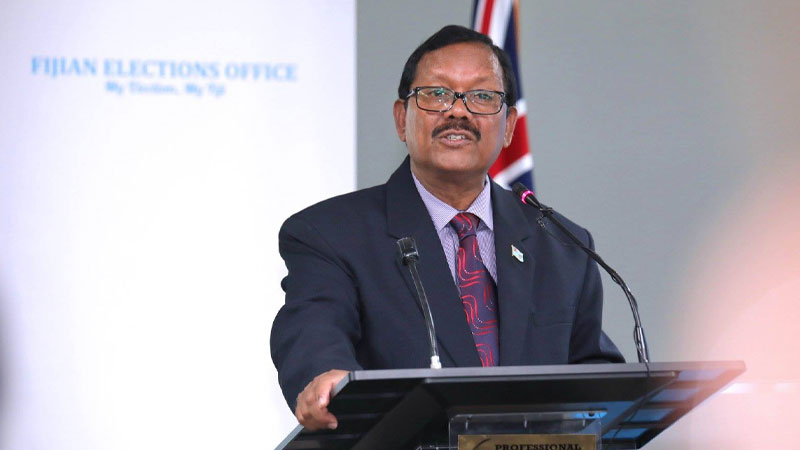 The head of the Legal Practitioners Unit and Chief Registrar Yohan Liyanage says they do not disclose details of any investigation when asked by fijivillage on whether former Chair of the Electoral Commission, Suresh Chandra is under investigation.

The Legal Practitioners Unit has however confirmed that Chandra does not have a legal practising certificate.

Liyanage says they cannot confirm if an investigation is underway.

Meanwhile, Fiji Labour Party Leader, Mahendra Chaudhry says the resignation of the Electoral Commission Chairman Suresh Chandra, does not put a closure to the issues raised in their letter to the Chairman of the Constitutional Offices Commission.

Chaudhry made the comments after Chandra's sudden resignation a day after the leaders of FLP, Unity Fiji and Freedom Alliance had written to the Constitutional Offices Commission Chairman Voreqe Bainimarama, calling for an investigation into the allegations of misconduct against Chandra.

The FLP Leader says the Attorney General and Minister for Elections Aiyaz Sayed-Khaiyum must explain why Chandra was allowed to continue as Chairman of the Electoral Commission after allegedly being reported to the Legal Practitioners Unit almost three years ago.

Chaudhry says it is also of some concern that the Legal Practitioners Unit itself did not pursue the matter in a timely manner with the relevant law enforcement agencies.

He says it is mandatory for State agencies to advise the Attorney General of any reports or allegations of improper or unlawful conduct on the part of holders of high public office.

Chaudhry has also questioned whether Sayed-Khaiyum was advised by the LPU of its investigation, and if so, what did he do about it.

The FLP Leader says on the other hand, the LPU must explain why it granted a conditional practising certificate to Chandra for two years while investigating the allegations.

He says these questions must be answered in the interest of justice and fair play.

Suresh Chandra has refused to make any comments regarding his legal practising license not been renewed by the Legal Practitioners Unit.

Under Section 75 (6) of the Fijian Constitution, the Electoral Commission consists of a chairperson who is, or is qualified to be a judge and 6 other members.

Questions sent to Chandra from last Friday about the non-renewal of his practising license remain unanswered.

Chandra made the announcement of his decision to step down on Saturday morning.

When asked by fijivillage on why he is stepping down, Chandra says he will not make any comments on it as he has not advised anybody officially yet.

We have also sent questions to Aiyaz Sayed-Khaiyum.