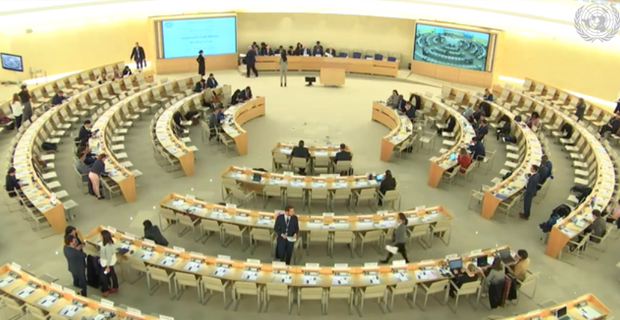 Legal Aid Commission Director, Shahin Ali says the first-hour procedure has been their greatest achievement, and it has seen a reduction in allegations of ill-treatment and an attitude change in the Fiji Police Force when dealing with suspects.

Ali highlighted this in his opening statement on the Universal Periodic Review of Fiji’s National Reports at the United Nations Human Rights Council in Geneva.

He says the first-hour procedure has also helped in the shift towards actual evidence gathering as opposed to reliance on confession.

He adds 60 percent of applicants of domestic violence cases are women.

Ali says with the establishment of specialised units, they are now able to better deal with sensitive cases involving children.

He says they also conduct prison visits and have taken up cases by prisoners for alleged ill-treatment and torture and refer complaints to relevant authorities when necessary. Fiji's Permanent Representative to the United Nations in Geneva Nazhat Shameem Khan says Section 17 of the Fijian Constitution declares that freedom of expression is a right in Fiji but it specifically deals with the protection of media freedom in the country.

While responding to questions on the Universal Periodic Review of Fiji’s National Reports at the United Nations Human Rights Council in Geneva, Khan says the constitution must be interpreted in line with international law and practices, and it is important that freedom of expression will also be interpreted by the courts.

She also says that due to a number of disturbing events on social media, the government has passed Online Safety Act. Police Commissioner, Sitiveni Qiliho says they are working closely with the Fiji Human Rights and Anti Discrimination Commission, the Legal Aid Commission and the Office of the Director of Public Prosecutions in the management, reporting, investigation and prosecution of breaches of human rights by police officers.

Qiliho highlighted this in his opening statement on the Universal Periodic Review of Fiji’s National Reports at the United Nations Human Rights Council in Geneva.

He says they have incorporated the UN Convention in assigning a dedicated Human Rights Cell, under the direction of the Internal Affairs to independently investigate and report on complaints against police officers on breach of human rights.

He says further to this, they have also crafted policy on the use of pepper spray for immediate implementation in association with the Fiji Police Force Policy.

Qiliho says training for this in all five policing divisions have been ongoing, and the same has been incorporated in their recruitment and training programs which is also extended to their regional counterparts.

Qiliho says in recognising the importance of collecting data of groups that are susceptible to vulnerability, they have started collecting data on the Lesbian, Gay, Bisexual, Transgender and also on persons with disability.

He says in addition to this the Fiji Police Force is on the verge of launching a web-based matrix for real-time registration of crime.

Qiliho says Fiji has incorporated a modern constitution with strong virtues in the Bill of Rights for its citizens which requires law enforcement agencies as the Fiji Police Force to improve infrastructure and policies.

The Commissioner says 2018 to date, more than 600 officers have been undergone human rights-related training.