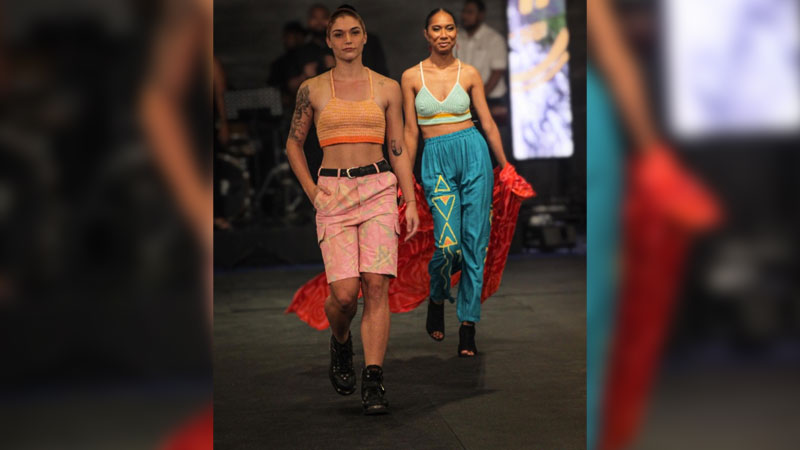 People were treated to a visual and musical spectacle last night at the 15th Fiji Fashion Week Resort Cruise Runway show which was their first major show after going virtual last year.

There was a blend of the some of the best local designers with big names in the New Zealand and Australian fashion industry while Rako Pasefika mesmerized the crowd with covers of songs on lali beats.

Nicholas Huxley who is the Head of the Fashion Design Studio at Sydney Institute, TAFE showcased his line called Everything Old is New Again while celebrated Maori designer Kiri Nathan featured clothes she says were inspired by Fiji and the tropics.

Hapers Bazaar Australia Fashion News Director Patty Huntington says she was really balled over by the FJFWxPalmolive 2022 show and thought it was fantastic.

Huntington says there were really some great stuff but as with every fashion week, not all of it was the best.

She says the prints were fantastic and she would love to know more about them.

Huntington was impressed with Rako Pasefika.

She further says clothes with traditional Fijian prints could have a wider international reach because they are authentically Fijian and not trying to be something else.

New Zealand model, Tia Woods who also runs her own modeling agency says has been impressed by the local models and there could be one model she could sign up.

There are only limited tickets available for the Resort Luxe Runway show this evening.

It will be live on the FM96 Instagram page.

The show is expected to start at about 7pm at the Vodafone Arena.

The man alleged to have murdered a 35-year-old farmer during an argument out at sea between Laucala Island and Taveuni last week has been ... 30 minutes ago

A relative of the man whose body was found under the Vatuwaqa Bridge earlier this week has come forward. Police say the victim has been identified ... 30 minutes ago