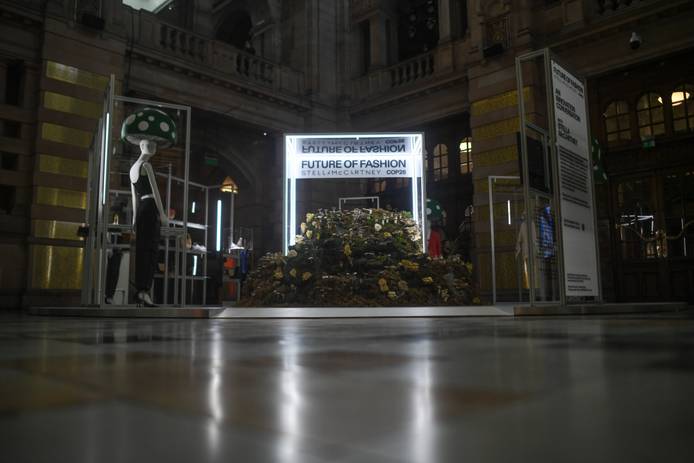 On November 9, the Great Britain and Northern Ireland Campaign partnered with the British Fashion Council to host the Great Fashion for Climate Action showcase at COP26.

A display of UK innovation, a number of designers were featured including those from Burberry, Phoebe English and Stella McCartney. Aimed at exhibiting the UK’s commitment to climate change through fashion innovation, the various designers used their products to encourage climate action.

Prime Minister Boris Johnson says, the great campaign showcases the best of the UK’s creativity and ingenuity across the world and that it was brilliant to see these British fashion brands innovating and leading the industry towards a greener future.

The showcase was chaired by British Fashion Council CEO Caroline Rush at the Kelvingrove Art Gallery and Museum.

The various brands presented their steps forward in sustainability, with model and sustainability activist Arizona Muse, who spoke at the show, wearing clothing by Mother of Pearl. The brand launched its first sustainable line, No Frills in 2018, and has begun to use organic cotton, wool and Tencel in the majority of its collections.

Stella McCartney has been working to develop a new plant-based material that is grown from the vegetative part of a fungus, and Priya Ahluwalia has transformed recycled materials such as deadstock and secondhand clothing into upcycled pieces.

Mulberry’s UK Somerset factories, which produce 50% of the brand’s products, have been carbon neutral since 2019. Mulberry has also committed to being net-zero in greenhouse gas emissions by 2035.

Burberry has committed to becoming net-zero by 2040, and Phoebe English has developed a less extractive fashion method using solely non-virgin resources, as well as reducing its fibre miles by manufacturing in London.

Phoebe English says they are to be able to showcase their work and methods as part of the COP26 conference.

English adds, the fashion sector has a huge opportunity to be contributing to healthier, less extractive systems,” said Phoebe English.