This is a people’s budget, the initiatives are attractive and the Bill to amend the iTaukei Land Trust Act will benefit the iTaukei landowners - PM

This is a people’s budget, the initiatives are attractive and the Bill to amend the iTaukei Land Trust Act will benefit the iTaukei landowners - PM 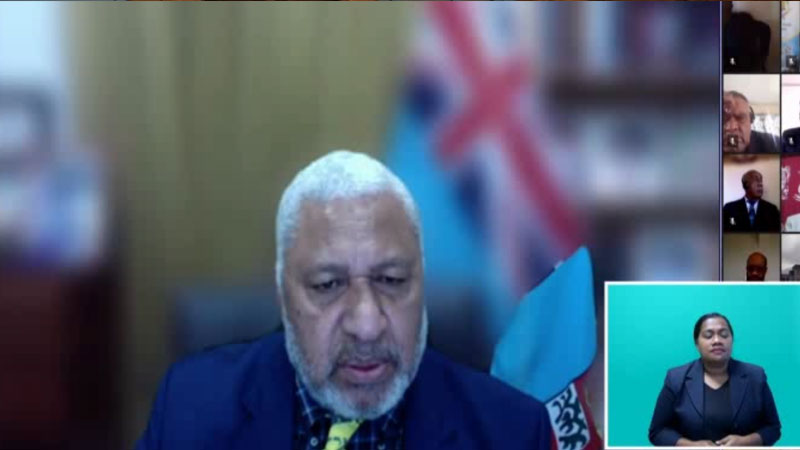 Prime Minister, Voreqe Bainimarama says the 2021/2022 National Budget is a people’s budget, the initiatives in the budget are attractive to everyone and other matters like the amendment to the iTaukei Land Trust Act will benefit the iTaukei landowners.

While speaking in the budget debate from his home as he is in isolation after coming into contact with a COVID-19 positive case, Bainimarama says we are adapting, we are making great sacrifices to protect ourselves, and we are racing to administer life-saving vaccines.

The Prime Minister says their mission is to fully vaccinate 80 % of the adults in Fiji by the end of October. He says people's health and our economy's recovery depend on meeting that goal, and they are acting decisively to reach it or even exceed it.

He says we have the chance to save lives, and we would be fools not to take it.

Bainimarama says 75 % of our target population, all of the eligible adults in Fiji, have received at least one dose of the vaccine. He says we need to get to 80% with both doses, at least.

The Prime Minister says he wants to get to 100%.

Speaking on budget cuts, Bainimarama says he for one thinks they could all do with less cake and other unnecessary indulgences at Government events. He says that's one cut to his Ministry's budgets that he is happy to make permanent.

The Prime Minister says they prefer progress and economic opportunity for all Fijians, and that means helping iTaukei landowners use their assets to improve their lives and livelihoods and become more prosperous.

Speaking on the need to bring the Bill to amend the iTaukei Land Trust Act, Bainimarama says even though someone may have a registered lease on iTaukei land, which means that TLTB has obtained consent from the landowning unit and the premium and lease terms and conditions have all been met, they still have an uphill struggle with bureaucracy to carry out development on that land, even if it clearly falls within the terms and conditions of the lease.

He says you want electricity to the land, you have to get approval from TLTB, you want to add a new road on the land or you want to change your financier, it's back to the TLTB for approval.

The Prime Minister says these approvals can take months or even years, depending on where the land is and which officer you are dealing with, for something as simple as making sure there is water running when you turn on the tap.

He says such a bureaucratic legal requirement has not only made iTaukei land unattractive, in particular for individuals, but it gave the opportunity to corruption which they cannot tolerate.

Bainimarama says they proposed an amendment to the iTaukei Land Trust Act that makes a simple administrative change to remove the TLTB's tedious approval process for development on leased land.

He says cutting this red tape makes iTaukei leased land more attractive to potential lessees, and that makes the land more valuable, and that increase in market value will directly increase the income the landowning units will receive from leased land, as they are entitled to receive under the Constitution. But he says the entire opposition party is built on scaring the iTaukei people into submission, they cannot stand the idea of masses of well informed, financially stable and prosperous iTaukei people; because that means an end to their political careers.

Bainimarama says all of this has been confirmed by the CEO of TLTB, Tevita Kuruvakadua though he suspects SODELPA Leader, Viliame Gavoka and his merry men and women who are hanging on to this self-imploding party called SODELPA, will not back off from their opposition.

He thinks SODELPA MP, Lynda Tabuya was a bit embarrassed after proposing that the Government "print more money" and put in people's FNPF accounts. He says that is an option that has been tried and discredited time and again because it has led to hyperinflation and economic ruin.

Bainimarama says maybe someone from TikTok Zimbabwe reached out and asked her if she was crazy enough to repeat Zimbabwe’s experience.

He says he wants the iTaukei who are young, the women, those who are about to turn 18, and the too-often marginalized members of the land-owning units, to remember that the equal share they are currently enjoying or are about to access was all opposed by the SODELPA leadership and membership and the NFP which never openly supported equal distribution.

Bainimarama also says the work of the Ministry of the Sugar Industry has protected cane farmers from pandemic price swings for cane because they have maintained a stable guaranteed price floor of $85 per tonne.

He says there was an effort to organize a protest by cane farmers against the Government but it fell flat on its face because cane farmers know manure when they smell it.

Bainimarama asks people to imagine if cane farmers had listened to the politicians who wanted them to protest and withhold their cane.

He says this also shows the quality of the selfish, power-obsessed people the Government is up against - wanna-be politicians who are so desperate for power and so bereft of ideas that they are willing to leave cane farmers destitute just to elevate themselves.