The Revised Budget is an election budget – Opposition Leader

The Revised Budget is an election budget – Opposition Leader 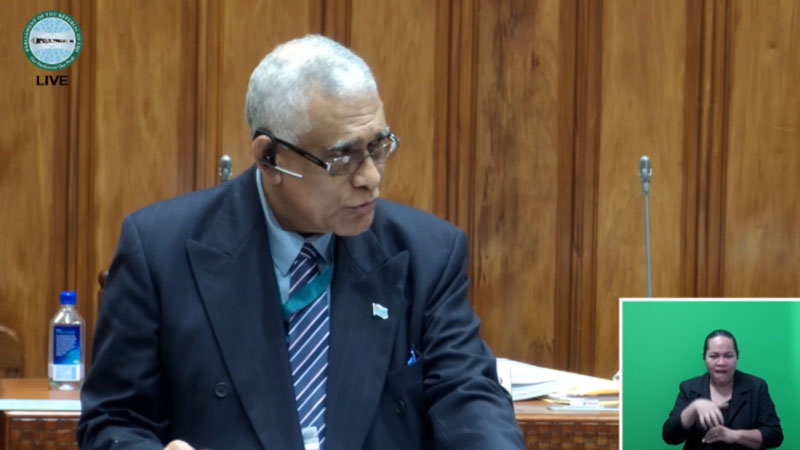 Opposition Leader Ratu Naiqama Lalabalavu says the Revised Budget presented last night is an election budget and has questioned how realistic are the revenue and expenditure figures stated in the budget taking into account the shortfall in revenue and under expenditure.

While opposing the Revised Budget, Ratu Naiqama says the FijiFirst Government is desperate to make a huge impression on the people of Fiji.

Ratu Naiqama adds it is interesting to note that the VAT for 21 basic items will be zero-rated and there will be an increase of VAT of 15% for 21 items.

Ratu Naiqama further says the poor will not only benefit from the zero-rated VAT items but also the rich.

He adds that the poor will have difficulties in accessing items such as textiles, clothing and footwear as 15% VAT will be imposed on those items.

Ratu Naiqama says they are happy with the $4 minimum wage rate which was initially proposed by the opposition.

He adds in the last 24 months they have seen 4 budgets presented which shows government just does not have the ability to plan anything and government has failed to lay out its 12 months revenue and expenditure proposal.

He says they are grateful for some of the announcements that were made last night.

Ratu Naiqama further says that it is the norm of the Attorney General to call the opposition unpatriotic, when they constructively criticize and suggest alternatives.

The Opposition Leader adds the Attorney General’s latest buzz word is un-Fijian and they suggest the AG must be more sensitive with the choice of words in the public domain particularly in Fiji's multi racial and cultural society.

He says there should be some incentives provided to the Fijians living abroad who have been sending remittances and supporting their motherland.

Ratu Naiqama adds that despite the claim of unprecedented growth in the last 15 years under the Bainimarama Government, the government cannot hide any more from the truth as our real GDP growth is the same level as we had in 2014.

The Leader of Opposition has also stressed that we will never be the same as Singapore or better than Australia and New Zealand as usually championed by the Minister of Economy.

He adds it is so sad and unprofessional for the Minister of Economy to continuously blame previous governments when things do not go right as the FijiFirst Government has been in power for more than 15 years and continue with the blame game like little kids rather than taking responsibility.

He further states that within 15 years, our debt level has ballooned to almost $9.6 billion which is in addition, to the contingency liability for the same period which has increased to $1.7 billion.

He says the claim that previous governments used to borrow money to pay for operating expenditure is a lie, mischievous, deceiving and amount to misleading the public.

Minister for Economy Aiyaz Sayed-Khaiyum will give his Right of Reply later today.