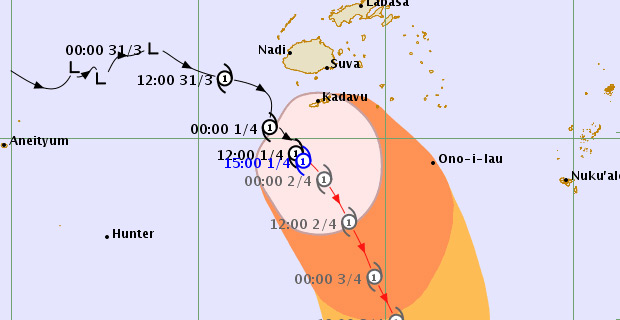 Tropical Cyclone Josie is continuing to move away from the Fiji group but a heavy rain and flood alert remain in force many areas in Viti Levu especially the Western Division. A strong wind warning is in force for Kadavu, Matuku and Ono-i-Lau. These expected strong winds will be indirect effects from the cyclone and it will be able to bring down some temporary or loose shelters and also damage crops.

The cyclone does not have a direct threat on Fiji based on its projected track but people living in Kadavu, Matuku and Ono-i-Lau should expect some strong winds.

The Nadi Weather Office says on this track, the Cyclone Centre is expected to be located about 270 kilometres South of Kadavu at 9pm.

The cyclone is moving southeast at about 8 kilometres per hour.

A flood alert remains in force for Navua Town, low lying areas near the Rewa River, Vatukacevaceva to Rakiraki Town, Sigatoka Town, Ba Town and Votualevu to the Nadi river.

Kings Road is closed at Ba Town in Wailailai Flats.

In Koronivia, residents say second crossing along Koronivia Road is flooded and can only be accessed by heavy goods vehicles.

Please note that there is a lot of debris on roads that were flooded.

A landslide has cut off access to hundreds of people living in Talaiya in Ba.

Flood waters parts of Ba Town have receded and the District Officer Ba has confirmed that Ba Town is now open.

Police have confirmed that Wailailai flats and Yalalevu are also affected by flood waters however water levels are receding.

The Nadi backroad is still flooded.

Police have confirmed that the Nadi bus stand and parts of Nadi Town is still flooded.

Stay with us for the latest update on the weather.