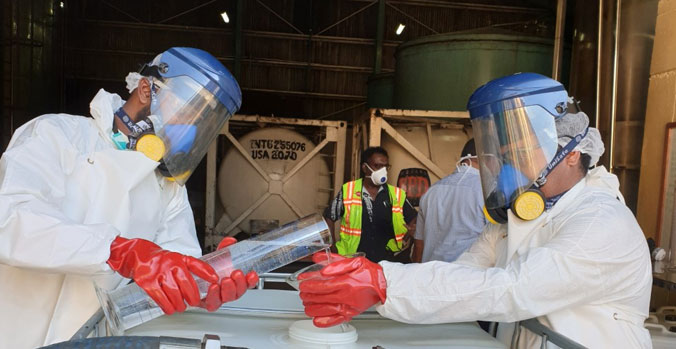 Fiji’s leading alcohol beverages manufacturer, Paradise Beverages has worked with some businesses and commenced producing more than 25,000 litres of  for distribution for free to the people of Fiji.

The 25,000 litre batch of hand sanitiser will be delivered by Coca-Cola Amatil Fiji to hospitals, medical centres, and villages in 1000 litre and 20-litre vessels.

The company’s distillery in Lautoka, which is mostly known for its spirits with brands including Bounty Rum, Regal Gin and Whiskey, will shift its production to alcohol-based hand sanitisers to help address the supply issues currently faced by most Fijians.

Spencer says they are all committed to protecting the safety of their people and Fiji.

He says the team recognised the growing need for sanitiser in March and were quick to create a 40 litre test batch per the World Health Organisation’s recipe.

The Ministry of Health has tested and approved the sanitiser.

Spencer says since March they have been working with a number of companies to procure the ingredients and services needed to make, and importantly distribute, more of the hand sanitisers under these challenging conditions.

Spencer says FSC has made an impressive contribution of 100 tonnes of molasses. He says as molasses is an ingredient in their alcohol production, and alcohol is 70 per cent of hand sanitiser, this means they will reach the hands of thousands more Fijians – literally.

Once delivered, the sanitiser will then be distributed at the discretion of medical staff and community leaders.

Spencer says this is an expensive exercise. He says they have the capacity to make more sanitiser and appeal to any business or organisation that is willing to help, to contact him at Paradise Beverages.

He says the more help they get, the more sanitiser they can make and distribute free of charge.