It is true whatever the results may be, one including me will have to accept it but it is obvious Rabuka will not want to accept the outcome - PM

It is true whatever the results may be, one including me will have to accept it but it is obvious Rabuka will not want to accept the outcome - PM 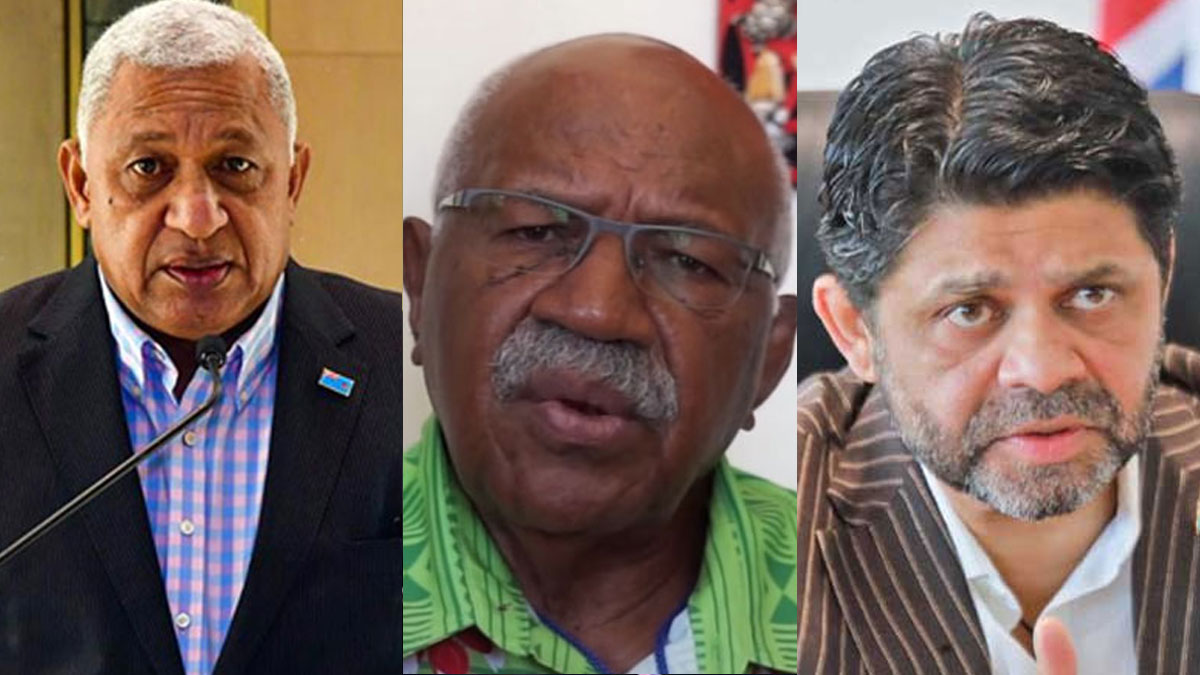 Prime Minister, Voreqe Bainimarama says Sitiveni Rabuka is on a hunt for the prime-ministership again, and he just wants to remove Bainimarama and his Government.

While speaking in an interview on Radio Tarana, Bainimarama says Rabuka keeps calling him a dictator although majority of the people of Fiji voted for Bainimarama and the FijiFirst in 2014 and 2018. He says it seems like a personal revenge as Rabuka wanted to take over command in 2000.

Bainimarama stresses that the Great Council of Chiefs is not coming back.

Meanwhile People’s Alliance Leader, Sitiveni Rabuka says as they operate in line with the rules of democracy, they naturally have internal disagreements.

While making a statement on the concerns raised regarding People’s Alliance proposed candidate, Liliana Warid’s comments on Indo Fijians being referred to as visitors and Aiyaz Sayed-Khaiyum’s attack, Rabuka says internal differences are normal in a democratic organization, and Sayed-Khaiyum and Voreqe Bainimarama have no understanding or tolerance for differences.

He says what Bainimarama and Sayed-Khaiyum say goes.

Rabuka says the People’s Alliance resolves disagreements while getting on with the task of working with the people.

He says their aim is to take Fiji into a new era of freedom, openness and prosperity.

Rabuka also says Sayed-Khaiyum is the last person to be lecturing anyone about leadership.

He says the failed, incompetent and unprincipled leadership of Sayed-Khaiyum and the Prime Minister has brought Fiji to a low point.

The People’s Alliance Leader says the nation is struggling, and he repeats what he said previously - Bainimarama has lost control of his government.

Rabuka says Sayed-Khaiyum is the most power-hungry person in Fiji’s modern history.

He says Sayed-Khaiyum succeeded long ago in gathering the Prime Minister’s authority to himself.

Rabuka says Bainimarama was too weak to stop this power trip and now just meekly follows Sayed-Khaiyum’s leadership of the nation.

He also says the two of them do not follow the inclusive principles of democracy, based on debate, dialogue and eventual consensus.

The People’s Alliance Leader says their leadership model is an intolerant dictatorship ruling by fear, and Sayed-Khaiyum and Bainimarama should take a lesson from the Alliance in how to manage a political party.

Rabuka says under his leadership and with the loyal support of many able officials and supporters, it has taken them only six months to create a nation-wide movement.

He says it is based on equality and multiracialism.

Rabuka says they complain about the economic damage this is creating in the world economy and to the region but at the same time they offer aid and comfort to Russian dictator Putin by broadcasting daily pro-Russian propaganda on FBC TV.

He also says the Prime Minister was unable to stop Sayed-Khaiyum’s relentless campaign to financially cripple the University of The South Pacific, the most successful example of Pacific Islands’ co-operation.

He says the USP provides higher education for thousands of young Fijians and many students from the region but this does not deter Sayed-Khaiyum.

Rabuka says he wants to have his own way, come what may.

He also says his seriously flawed ministerial leadership in economic and financial matters has driven Fiji into a deep hole of debt, and the burden of repayment will fall on the long-suffering people.

We have asked Rabuka to confirm whether the issue regarding Warid's post has been discussed with her and what is the final outcome on it.

We have also asked what is the party's stand on Indo Fijians being called visitors.

Rabuka is in the US and we are awaiting his response.

While responding to Rabuka’s comments, Sayed-Khaiyum says Rabuka should state what is his stand on Warid’s comments.