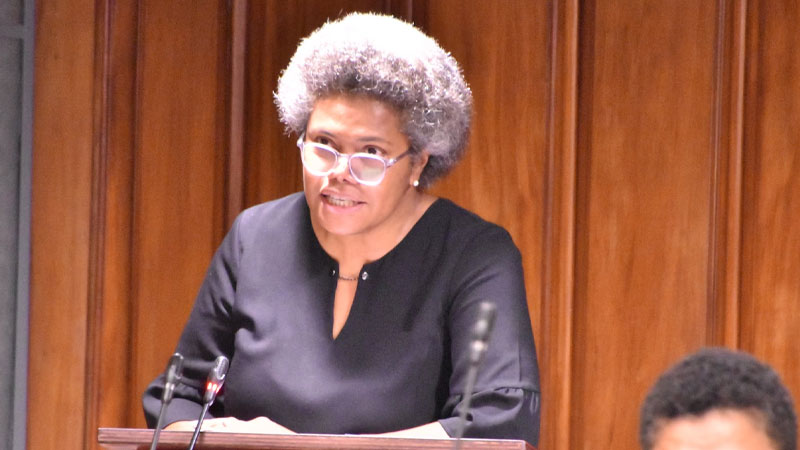 National Federation Party MP Lenora Qereqeretabua says the FijiFirst Government has shown us time and time again that behind all the puffery, the chest beating and the long winded speeches is their chronic inability to get things done right.

While speaking in Parliament, Qereqeretabua says the budget reflects the government's character of being strung along by short-term gains rather than long-term vision.

She says our economy was already slowing before COVID ever existed where growth was slumping, wages were stagnant, productivity was declining, investment was slowing and debt was rising.

Qereqeretabua says yet this government had the temerity to try and convince all of us that everything was okay and the promises just kept coming.

She says when the NFP was going to introduce a living wage, the government said they cannot afford it and when the NFP wanted to have 23 basic items VAT exempt, government through FRCS Board Chairperson Ajith Kodagoda said that it will not benefit any Fijian and that its implementation would be chaotic.

Qereqeretabua says just 3 months ago when they wanted a removal of the 20 cents fuel tax, the Attorney General is on record saying the idea was stupendously stupid.

During his right of reply, Minister for Economy Aiyaz Sayed-Khaiyum says NFP had recommended VAT exemption but there was no VAT monitoring system and that was how people were fleecing the system.

Sayed-Khaiyum says they have placed a VMS system since then to monitor items in the supermarket because people can cook the books but there will be better accountability with a VMS system.

He says they cannot just reduce the 20 cents fuel tax overnight without having another revenue source.

Sayed-Khaiyum says there is a $163 million reduction in government revenue as a result of removing VAT from 21 items.

Qereqeretabua also says the only choice for those who cannot afford to jet off overseas every time they need quality medical care is to rely on our health system at home.

She says for many people this is a death sentence.

Qereqeretabua then went on to say that whether you are in government or out of it, if you have been involved in corruption, they will come down hard on you. She adds it is clear that this is the budget of a government desperately gasping for its last breaths but there is no doubt nothing will save them now.

Fijian Drua centre Kalaveti Ravouvou who will make his debut for the Vodafone Flying Fijians this afternoon is relishing the opportunity to play again... 1 hour ago
LATEST NEWS