All requests are to be made to the PS Health

All requests are to be made to the PS Health 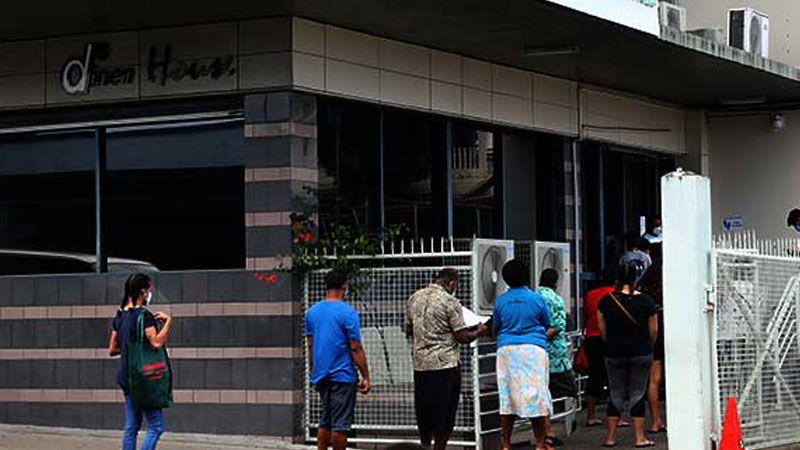 People rushed to the Health Minitry HQ to get passes.

Permanent Secretary for Health, Doctor James Fong has confirmed that the Health Ministry has stopped Police passes being used at the containment zone borders.

As all efforts are being made to ensure that the virus is contained, Doctor Fong has also confirmed to fijivillage that the only recognized pass if any to move from one zone to the next will be the one approved by the Permanent Secretary for Health.

He says the Police passes issued for access from one zone to the next from Monday to today will not be recognized. Please take note that any person in a containment zone in Lami, Suva, Nausori, Nadi and Lautoka must not leave the containment zone they are in, with effect from 4am April 26th 2021, unless authorised by the Permanent Secretary for Health and Medical Services.

This is clearly stated in the government gazette signed off by the Permanent Secretary for Health.

Fijivillage stresses that you cannot just get a pass to cross the containment zone as it would defeat the purpose to have a containment zone to contain the virus if people are allowed to travel between one zone to the next.

According to the gazette, the Lami Containment Zone is from Wainadoi Police Post to Tamavua-i-Wai Bridge.

The Suva Containment Zone is from Tamavua-i-Wai Bridge to Wainibuku Bridge near Rups Nakasi.

The Nausori Containment Zone is from Wainibuku Bridge nears Rups Nakasi to Logani Village in Tailevu on Kings Highway.

The Lautoka Containment Zone is from Lomolomo Police Post to Nacilau.

The Nadi Containment Zone is from the junction of Queens Road from Momi Bay to Lomolomo.

Doctor James Fong stresses that people should not move from one zone to the next unless the ministry gives the approval after a risk assessment. People should focus on accessing services within their own containment zone.

Vehicles were still seen moving in and out of the containment zone borders at the Tamavua-i-Wai and Wainibuku Bridge near Rups Nakasi this morning, and concerns were raised on what type of assessment is being done to ensure no COVID carrier is going from one zone to the next.

We had noticed Police officers at the borders checking Police passes and allowing vehicles through.

Doctor Fong has directed that this be stopped and the gazette be followed to control the borders.

We are awaiting the containment border guidelines followed by Police based on the government gazette.

Doctor Fong has already stressed that the containment zones have been set up to ensure people do not move around as when the people move the virus moves.