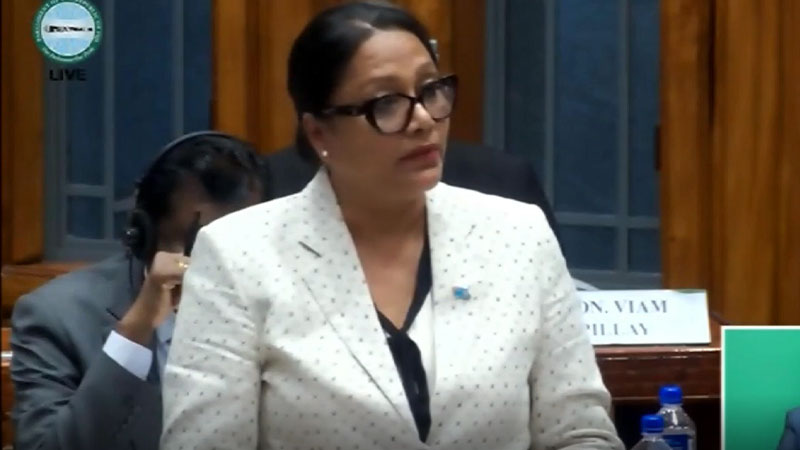 Minister for Education Premila Kumar has asked the Leader of National Federation Party Professor Biman Prasad if he can explain to students in other fields that are oversupplied with graduates why they have not received scholarships.

Kumar highlighted this after Professor Prasad had said that Kumar's recent remarks on the student that scored the highest mark in the Year 13 exam that had wanted to study medicine and surgery but could not, is deplorable and disgusting.

While supporting the Revised National Budget in parliament today, Kumar has also questioned Professor Prasad if he can explain to the hundreds of law students why he is only pushing for MBBS scholarships and not LLB scholarships.

She says the National Toppers Scheme’s role is to enable the government to strengthen sectors of the economy where employees are needed by providing scholarships for students seeking an education in those fields.

She says it is to ensure that the gaps in underserved economic sectors in Fiji are filled, so they have enough engineers, pharmacists, lab technicians, nurses, and agricultural specialists to keep the nation progressing.

Kumar says they are investing in students not just for them to attain higher education but also making sure that they get into areas that offer better job prospects and of course, meet Fiji’s needs.

She adds that this is a common-sense based and practical initiative to provide support for those sectors where there is demand.

She says given the circumstances faced by Year 13 students, the lowering of the top marks for TSLS awards to 250, except for commerce category, this will allow more students to enter tertiary institutions.

Kumar says TSLS is a statutory body which is governed by the board and it has its own CEO which does its own due diligence by caring out their surveillance, research and fact finding.

She says that is when they are able to either increase or decrease a particular quota.

Kumar says the regulation for TSLS is very clear and it simply says that if a quota is not filled, then TSLS can reduce the marks to fill the quota.

She says it is very important for TSLS to consider Fiji's needs when it comes to giving scholarships or giving loans for these studies.

Kumar said in parliament that it is common knowledge that CFL and Fiji Times will provide headlines for NFP on statements from government ministers in a negative way and many times commenting without due care on the context of the statement.

The Nadi Sangam College student had scored 395 out of 400 and had wanted to study medicine and surgery but could not do this as there was no National Toppers scholarship that caters for this program.

When earlier questioned if the Ministry will consider giving her a scholarship in the area since she scored the highest mark, Kumar had said they need to focus on areas where there is employability.

Meanwhile, CFL stations, Legend FM, FM96, Viti FM, Navtarang and Radio Sargam and website, fijivillage always stand for balance, fairness and accuracy. CFL does not support any politician or political party and also does not stand for or support any form of discrimination against any particular individual.