3 inmates graduate from the Nasinu Vocational Centre with high ambitions

3 inmates graduate from the Nasinu Vocational Centre with high ambitions 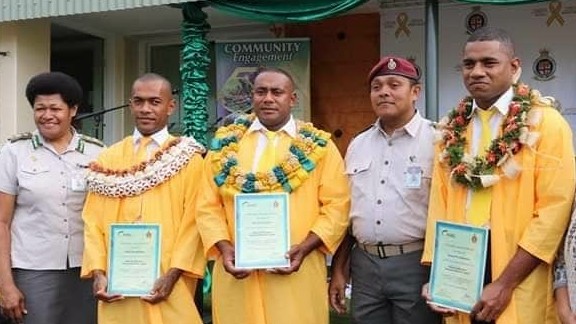 3 inmates from the Fiji Corrections Service have graduated from the Nasinu Vocational Centre today and have already set a plan on what they want to achieve in the future.

Nasinu Vocational Centre is facilitated within the Nasinu Corrections Centre for young offenders between the age of 18 to 25 years.

Isimeli Baleirotuma says this opportunity has given him another chance at life as it has always been his dream to become a mechanic but the tertiary fees was too much for his family.

Baleiratouma says when he is released, he will try and start his own car servicing business.

One of the graduates Opeti Korodrau says it has been a long journey as they started with 20 other inmates but only the 3 of them were able to pull through till the end until they graduated.

He says this has been a life-changing journey and now he will be able to apply for a job and even further his education.

Korodrau says as a driver he only knew how to drive a vehicle but with this new skill, he will be able to fix vehicles.

Korodrau was released two months ago from the Nasinu Corrections Centre.

Meanwhile Samuela Vakanananu says when he was sentenced he thought life was over for him.

He says the program has given him a chance to further his education and when he is released in 2022, he will try and take additional courses at FNU and other institutions.

Vakanananu says he has set his ambitions high as he wants to teach Automotive Mechanics.

Commissioner of Corrections Commander Francis Kean thanked the 3 graduates for their commitment and diligence to complete the program.

He says all these programs are to help the inmates with another chance in life and teach them the skills to earn their wages when they are released from the care of Fiji Corrections Service. Commander Kean has confirmed additional courses will be offered which includes Fitting and Machining along with Refrigeration and Air Conditioning which will be available in August.