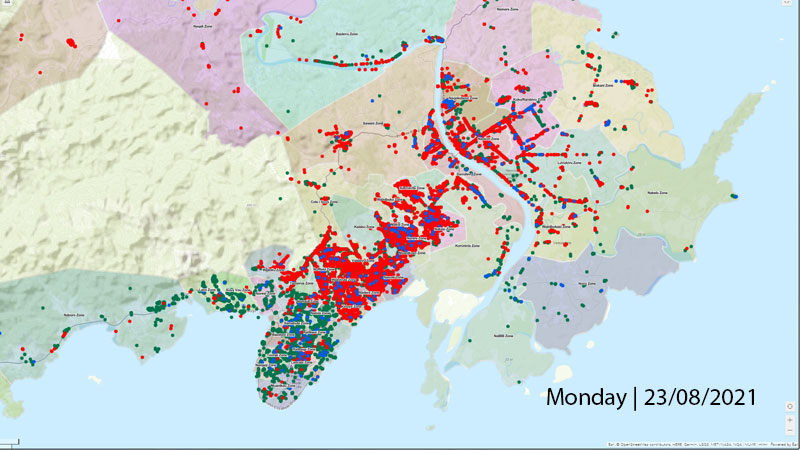 Permanent Secretary for Health, Doctor James Fong has announced 6 new COVID-19 deaths from the 16th to the 22nd of August, and this includes a 20-year-old woman.

The third death is a 44-year-old man from Tailevu. He presented to the CWM Hospital in severe respiratory distress. He died 3 days after admission on 22nd August. He was not vaccinated.

The fourth COVID-19 death is a 50-year-old woman from Tailevu who died at home on 20th August. She presented to the Lautoka Hospital in severe respiratory distress. She was not vaccinated.

The sixth COVID-19 death is a 71-year-old man from Rakiraki who died at home on 22nd August. He was not vaccinated.

There have been 4 more deaths of COVID-19 positive patients. However, these deaths have been classified as non-COVID deaths by their doctors.

Doctors have determined that their deaths were caused by serious pre-existing medical conditions and not COVID-19.

With today’s newly reported deaths, there have now been 444 deaths due to COVID-19 in Fiji, with 442 of these deaths during the outbreak that started in April this year.

As of August 18th, the national 7 day rolling average of COVID-19 deaths per day is 8.

The 7 day rolling average for COVID-19 deaths per day is 2 in the Central Division 6 in the Western Division.

We also have recorded 257 COVID-19 positive patients who died from the serious medical conditions that they had before they contracted COVID-19; these are not classified as COVID-19 deaths.

There are currently 279 COVID-19 patients admitted to hospital.

26 patients are considered to be in severe condition and 14 are in critical condition. 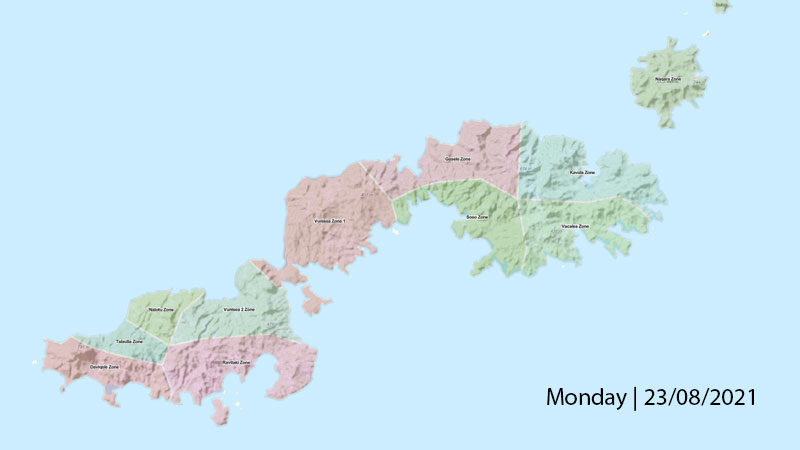 4 new COVID-19 cases have been confirmed in Kadavu from Namalata Village bringing the total number of confirmed cases on the island to 135.

Doctor Fong says the clinical scoping team has put together a clinical response plan that will help to efficiently escalate their response to the expected wave of severe disease and deaths in Kadavu however they do anticipate this to be a challenging exercise.

The team is expected to depart for Kadavu over the next 2 days.

FEMAT response to Kadavu will involve both public health and clinical teams.

The clinical team will include doctors and nurses from the clinical specialized fields of medicine.

Doctor Fong says upon arrival in Kadavu the clinical team will boost up the public health response on case identification through rapid diagnostic tests, risk assessment and stratification, COVID awareness, vaccination coverage and clinical case management based on the clinical care flow pathway.

The aim will be to identify the extent of transmission, instituting containment strategies, early detection and retrieval of sick cases and minimizing deaths.

They will also work very closely with the teams from other ministries under Provincial Administrator Kadavu on community engagement.

Doctor Fong says the main goal is also to minimize severe and critical cases given the expected challenges in medical evacuation.

While they commit towards community response and engagement the logistic teams will be setting up the COVID wards and the intermediate care facilities in readiness for patients with severe COVID-19 disease.

Meanwhile there have been 616 new recoveries reported since the last update, which means that there are now 19,062 active cases.

Doctor Fong says the daily testing numbers have also been dropping around the same time as the drop in numbers, due to the change in testing policy in Suva-Nausori.

Since July 21st, only persons that have a higher risk of developing severe COVID-19 are being targeted for testing in Suva-Nausori.

This was done so that resources could be targeted to early detection, monitoring and care of persons with COVID-19 who are at higher risk of severe disease, to prevent more people succumbing to severe disease and death.

Doctor Fong says they will be transitioning to community surveillance testing as severe disease numbers and positivity rates approach the containment phase levels.

The Ministry is closely monitoring indicators such as test positivity, hospitalisations and deaths to track the progress of the outbreak in Suva-Nausori.

Doctor Fong says they are seeing increasing cases reported in the Western Division with evidence of widespread community transmission in that division.

The Northern Division remains with one active case, with all contacts in quarantine so far testing negative, and swabbing results from within the containment area, and nearby communities also returning negative.

Minister for Economy, Aiyaz Sayed-Khaiyum says calling People’s Alliance “Paap” or “Paapi” is a play of words just like calling someone from... 59 minutes ago
LATEST NEWS