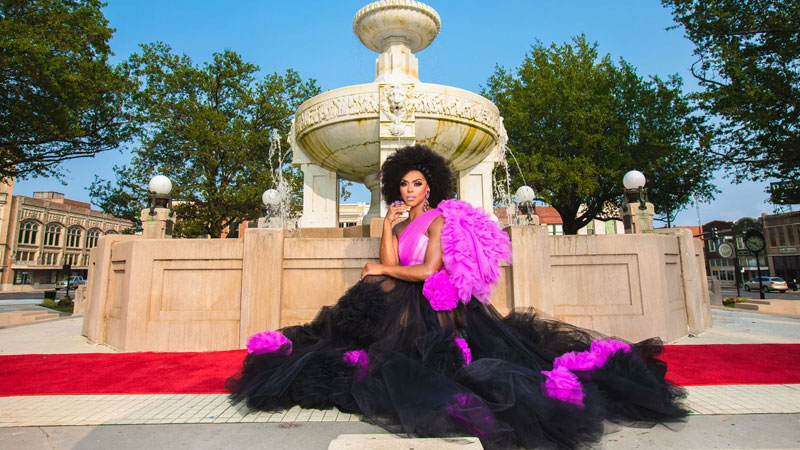 The absence of a red carpet at this year’s Emmy Awards didn’t stop drag superstar D.J. Pierce (better known to adoring fans as Shangela) from getting glammed up for it.

This weekend, Shangela was nominated for an Emmy for her series We’re Here in the category of outstanding unstructured reality program.

The HBO series follows Shangela and fellow drag stars Bob the Drag Queen and Eureka O’Hara as they travel across the U.S. to recruit small-town residents to participate in one-night-only drag shows.

“This was my very first time being a part of a show, as a host, and being nominated for an Emmy,” Shangela tells Vogue.

For the big night, the drag queen decided to take matters into her own hands, turning her Emmys weekend into a fashion-filled extravaganza that was all about celebrating her big nomination through style. Since March, Shangela has been quarantining in Paris, Texas, with her grandma.

When the Emmys were coming up, she knew that, as a nominee, she would have to bring a major fashion moment to it—even if it was from a small town.

“I was like, why don’t we bring a little Hollywood Boulevard over here to the backyard,” she says, adding that she avidly follows the red carpets during awards season.

“I’m one of those people who runs to the internet to look at what the fashions were. I was so excited to be a part of that the minute we found out about the nomination.” To do so, Shangela turned this past weekend into a series of glamorous photo ops to honor the Emmys, traipsing around Paris in two fabulous creations by Christian Siriano, a friend of hers.

“Christian’s designs are epic,” Shangela says, “and the thing about Christian is that he dresses people that, a lot of times, don’t get dressed.

I’m not a huge Hollywood star—I’m not Julia Roberts—but he’s so generous with his art.” Posing for the photos over the course of one day, Shangela rocked a pink and black tulle gown at the Eiffel Tower and in front of a Dairy Queen, and a tinsel-style gown shot in a friend’s spacious backyard.

“We have some really cool things in our hometown,” says Shangela. “We almost caused a couple of accidents because of rubbernecking people.” Finishing details, such as dazzling jewelry from Lolli Cox, all styled by Nick Vosian, made the looks feel especially Emmy-ready.

The pièce de résistance was a custom plastic face shield embellished with Swarovski crystals, made by Shangela’s friend and collaborator Rico Cavalli.

“He literally made it for me overnight,” she says.

“In a pandemic, you’ve gotta keep it distant—Halleloo!”