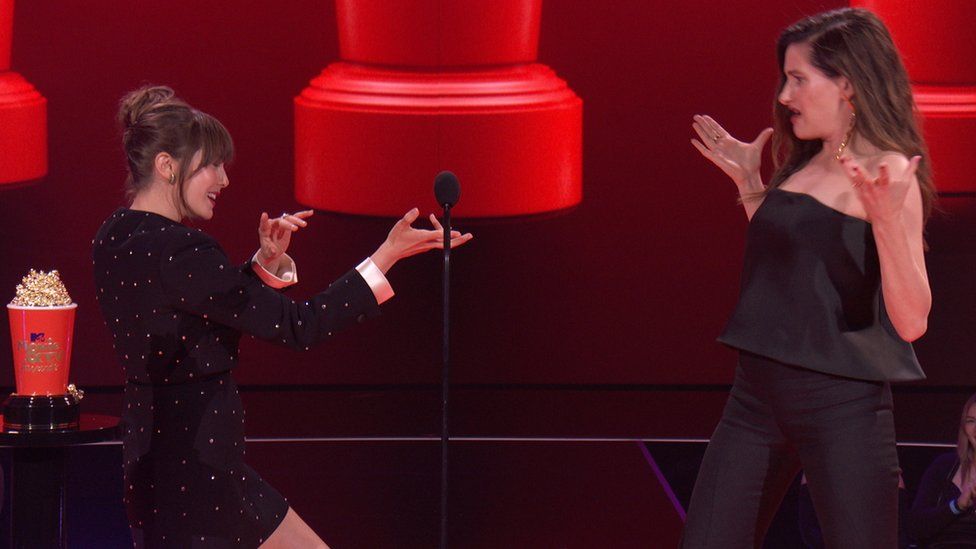 After a year off due to the pandemic, the fan-voted show returned in front of an in-person audience at the Hollywood Palladium in Los Angeles.

The Marvel Comics-inspired mini-series takes place after the events of the 2019 film Avengers: Endgame.

The Netflix teen romance To All The Boys: Always And Forever was named best movie.

In the gender-neutral individual categories, WandaVision star Elizabeth Olsen won best performance in a show for her portrayal of the avenger Wanda Maximoff/Scarlet Witch.

Sacha Baron Cohen rolled out some of his best-known characters while accepting the comic genius award.

He accepted the prize as the Kazakhstani journalist Borat, before being interrupted by the wannabe gangster Ali G.

Best performance in a movie went to the late Chadwick Boseman for the music drama Ma Rainey's Black Bottom.

Best breakthrough performance was won by Regé-Jean Page for his role in the period drama Bridgerton – Netflix's biggest ever show.

Page is rumoured to be in the running to play the next James Bond.

Best movie – To All The Boys: Always And Forever

Best hero – Anthony Mackie (The Falcon And The Winter Soldier)

Most frightening performance – Victoria Pedretti (The Haunting Of Bly Manor)

Best musical moment – Edge Of Great (Julie And The Phantoms)

A 31-year-old woman who crossed the Nawaka containment area to travel to Vatusekiyasawa Village in Ra has been taken into police custody. Acting ... 40 minutes ago