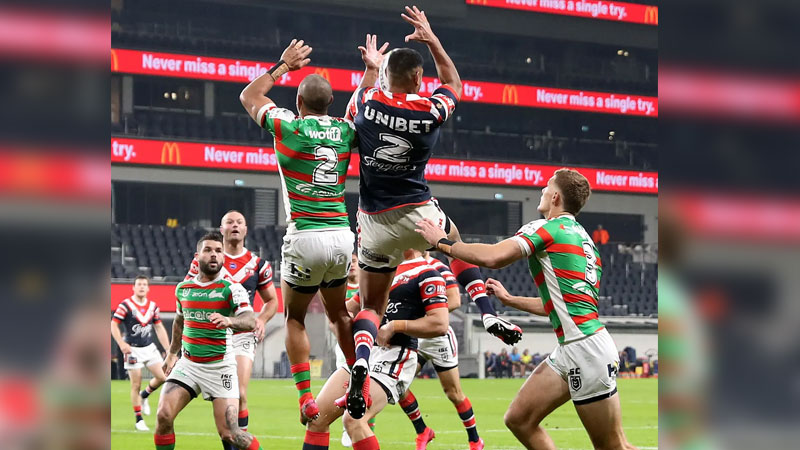 Taniela Tupou was in fine form for the Roosters as they beat Rabbitohs last night. [image: NRL]

The Sydney Roosters have recorded their first win of the season after defeating the South Sydney Rabbitohs 28-12 in the NRL last night.

This was the third match after the resumption of the National Rugby League and it took place in an empty Western Sydney Stadium.

The Roosters have been champions for the last two seasons.

The Rabbitohs, part-owned by Hollywood actor Russell Crowe, are among the most popular teams in Australia but the only support visible last night were a few dozen cardboard cutouts that fans had paid to have propped up on empty seats.

All eyes were on Latrell Mitchell who switched between the clubs at the end of last year and was facing his former Roosters teammates for the first time.

The Roosters led 12-6 at halftime on the back of two tries, the second a glorious sweeping movement finished off by young five-eighth Kyle Flanagan, and ran in three more through James Tedesco, Boyd Cordner, and Jake Friend after the break.

Tries from Cameron Murray and English prop Tom Burgess kept the Rabbitohs in the hunt but the Roosters' defence held firm through some furious exchanges to record their first win from three matches this season.

In the other match last night, the Cowboys thrashed the Titans 36-6.

Fiji Airways has extended international flight cancellations through to the end of August. Fiji Airways Managing Director and CEO Andre Viljoen ... 3 minutes ago

The Head of the Catholic Church in Fiji Archbishop Peter Loy Chong says they cannot deny that there have not been victims of abuse in the church and ... 38 minutes ago