Apted representing the 7 women and Sharma represents the AG, the Supervisor and the State

Apted representing the 7 women and Sharma represents the AG, the Supervisor and the State 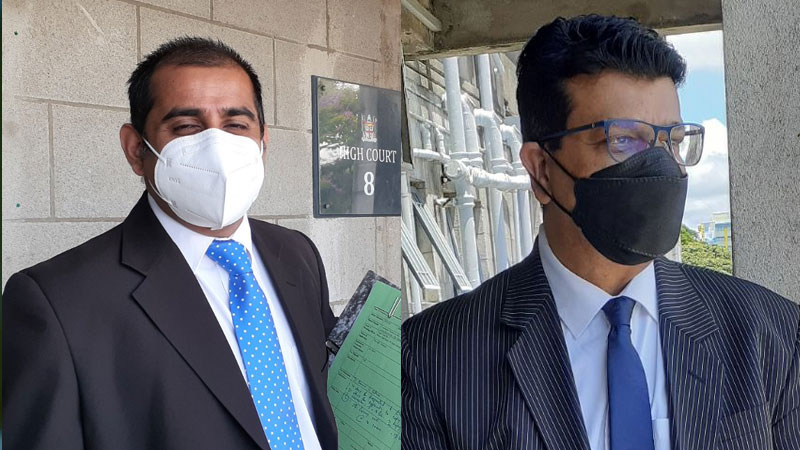 7 women supported by the Fiji Women’s Rights Movement and the Fiji Women’s Crisis Centre have filed a constitutional challenge against the Electoral Registration of Voters Amendment Act and the Interpretation Act on the grounds of sex, gender and marital status discrimination and also on the basis that it violates the privacy and social and cultural identity of 100,000 Fijian women.

They have filed the case against the Attorney General, the Supervisor of Elections and the State.

The case was called before Chief Justice Kamal Kumar.

The 7 women are seeking a declaration that section 3 of the Electoral (Registration of Voters) (Amendment) (No. 2) Act 2021 and the amendments made thereby to section 4 of the Electoral (Registration of Voters) Act 2012 and the Interpretation Act are in breach of their rights under section 23 of the Constitution including their rights to free, fair and regular elections under the Constitution, to be registered as a voter, and to vote by secret ballot in any election under the Constitution.

They are also seeking a declaration that the amendments made are in breach of their rights under section 24(1)(c) of the Constitution of the Republic of Fiji to personal privacy, in particular respect for their family life and a further declaration that the new laws are in breach of their rights under section 26 of the Constitution including their rights to equality before the law, and equal protection, treatment and benefit of the law, full and equal enjoyment of all rights and freedoms recognised in Chapter 2 of the Constitution and under written law, and not to be unfairly discriminated against directly or indirectly on the grounds of their actual or supposed personal characteristics or circumstances, including their sex, gender, and/or marital status.

They are seeking a declaration that the amendments by reason of inconsistency with the Constitution are under section 2 of the Constitution invalid and of no force or effect. The women are further seeking an order that the Supervisor of Elections take all necessary steps to enable Yasmin Nisha Khan and all other persons who have amended their names on the National Register of Voters from their adopted married names to their birth certificate names as a consequence of the Electoral (Registration of Voters) (Amendment) (No. 2) Act 2021 to revert from their birth certificate names to the names under which they previously appeared on the National Register of Voters.

Sharma today told the court that they oppose the motion by the 7 women and will need 14 days time to file an affidavit in response.

He says because there are several plaintiffs in the matter, they will give one affidavit in response to all their applications.

Sharma says Munro Leys can be given a further 14 days to respond.

Chief Justice Kumar has given defence time until the 14th of January to file their response while the plaintiffs can respond before the 4th of February, 2022.

He says both parties can file further submissions before the 23rd of February.

The matter will be called in the Suva High Court on the 24th of February, 2022.

The Government had earlier said that with the new law, the women can decide themselves if they want to change their names, and all they have to do is go to the Births, Deaths and Marriages Office, fill out the form and a new birth certificate with the changed name will be done.