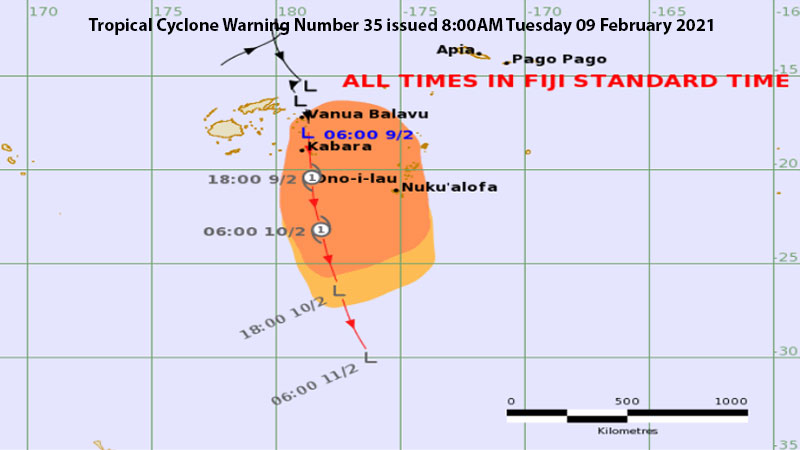 Expect damaging winds for the land areas of the Lau group which include Vanuabalavu, Mago, Tuvuca, Cicia, Nayau, Lakeba, Vanuavatu, Moce, Vatoa, Kabara, Fulaga, Oneata and Ono-i-Lau while people in Vanua Levu and Lomaiviti are expected to experience heavy rain and strong winds.

The Nadi Weather Office says a strong wind warning remains in force for the land areas of the Lomaiviti group and Western parts of Vanua Levu from Dreketi through to Labasa to Udu Point.

A heavy rain warning remains in force for Vanua Levu, Taveuni and nearby smaller islands, Lomaiviti and the Lau group.

The centre of Tropical Depression TD09F is located about 60 kilometres South South West of Kabara.

The depression is moving towards the south at 34 kilometres per hour, and the centre should pass close to Ono-i-Lau at 3pm today.

Damaging winds can cause damages to weak structures and houses of very light material, crops and vegetation.

If you are residing in a low lying area in the North, then you need to prepare now and make arrangements to move to higher ground or an evacuation centre as severe weather is expected for the Northern Division.

This is the message from the Assistant Commissioner Northern Vishwa Deo who says they have told Turaga-ni-Koro and Advisory Councillors in various areas to start preparing for strong winds and possible flooding.

He says those that are currently living in temporary shelter need to start planning to move to an evacuation centre.

Deo says their teams are ready to assist people.

Villagers of Lomaloma in Vanuabalavu, Lau are experiencing heavy rain and winds.

Villager, Vakamoce Sukabula says students were advised to return home earlier today and they are prepared as they have learned a lot from previous cyclones.

She adds they have already put up shutters and removed their solar panels, and some villagers have already moved to their evacuation centres.

Sukabula further says villagers have moved to the schools, their village hall and church.

Two senior students of a prominent school are in custody following their alleged involvement in an assault case yesterday. Police say the two stude... 29 minutes ago
LATEST NEWS

Assistant DPP Elizabeth Rice has alleged in the Suva High Court that Congo National Kiala Lusaka sent the photo of his deceased wife via Facebook to ... 44 minutes ago