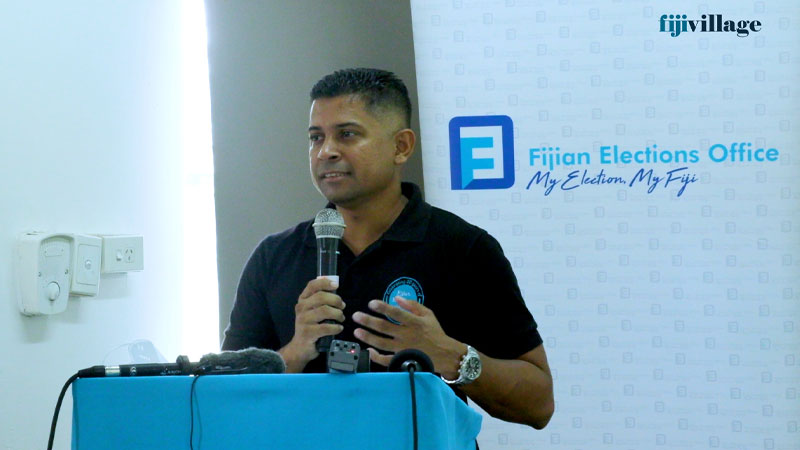 Supervisor of Elections, Mohammed Saneem says the Fiji Labour Party’s facebook post about him was fake news and he is now working on taking action under the Electoral Act.

The FLP post was on it’s official FLP facebook page where it claimed that Saneem had resigned after they had complained about him.

fijivillage has asked Saneem on whether he had intended to resign somewhere between December and this month. He did not want to comment.

When asked by a journalist on whether he had submitted his resignation and it was not received by the Attorney General, Saneem says that is incorrect.

In the case of the Supervisor of Elections, the appointing authority is the President after advice of the Constitutional Offices Commission.

When asked on claims that information came out of the Fijian Elections Office that he had resigned and whether this is a concern or is it something that Saneem is investigating, he says this is also an issue regarding journalism ethics.

Saneem said no comments when asked by fijivillage on the claims being made and whether he was part of a meeting last Friday where he had allegedly mentioned he would not continue in the position.

Acting Prime Minister and Minister for Elections, Aiyaz Sayed-Khaiyum had already said on Saturday night that the Supervisor of Elections has not resigned.

Sayed-Khaiyum made the comments when asked by fijivillage if Saneem has resigned from his position.

Sayed-Khaiyum made the comments when asked by fijivillage News if Saneem has resigned from his position.

fijivillage News had sent questions to Saneem in mid December and again yesterday on whether he had given in his resignation letter to the Office of the President.

There has been no response by Saneem and the Fijian Elections Office when questions were emailed on 16th December last year and yesterday. We are still awaiting his response and clarification.

Meanwhile the Fiji Labour Party is claiming on their official facebook page that Saneem has resigned after the FLP, Freedom Alliance and Unity Fiji filed complaints against him.

The FLP then says that this is still unofficial news but they are reliably informed that the Fijian Elections Office staff held a farewell party for the Supervisor on Friday.

There is no official confirmation on what the FLP has posted and Sayed-Khaiyum stressed last night that the resignation has not taken place.