As Pacific Islanders, we should not be quiet about the issue - Ali

As Pacific Islanders, we should not be quiet about the issue - Ali 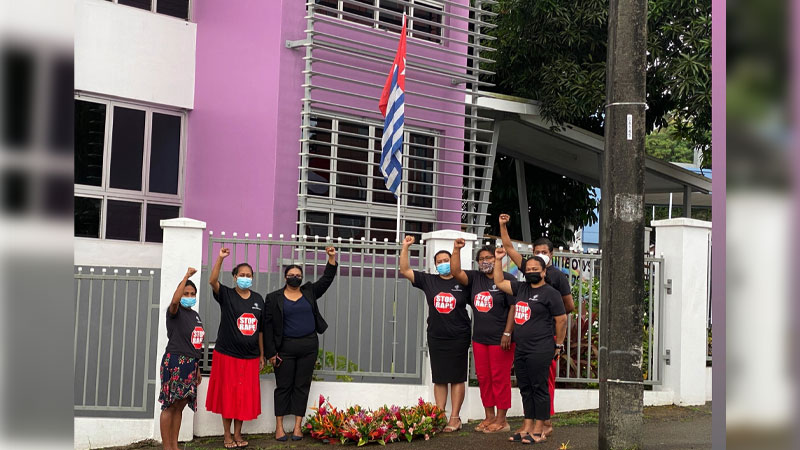 The staff of the Fiji Women's Crisis Centre in Suva have raised West Papua's Morning Star outside their office calling for West Papua’s freedom and right to self-determination.

FWCC Coordinator and Human Rights Activist, Shamima Ali says the event acknowledges and amplifies the growing call for West Papuans rightful path to freedom – a process that has been interrupted by Indonesian occupation.

Ali says as part of the 16 Days of Activism Campaign, FWCC is remembering the people of West Papua, particularly the women and girls who are suffering twofold due to the increased militarization of the province by the cruel Indonesian government.

She adds they also remember those women, girls, men and children who have died and those who are still suffering from state violence perpetrated on them and the violence and struggle within their own religious, cultural and societal settings.

Ali also paid tribute to those women human rights defenders who have passed on and those who passionately continue the good fight despite the challenges – their legacy lives on.

She said we must continue to make a stand against violence inflicted on the people of West Papua by the Indonesian Defense Force and demand for the country’s freedom from Indonesia.

Ali says they are fully aware of the suffering and human rights violations caused by Indonesian state policies that have left the West Papuan people desperate for self-determination and Papuan women even worse off.

She further says as Pacific Islanders, we should not be quiet about the issue.

The FWCC Coordinator adds we should continue to put pressure on those responsible for the widespread extrajudicial killings and hold them accountable.

She says Pacific leaders including Fiji have been too silent on the issue of West Papua and the ignorance needs to stop.

Ali adds keeping quiet is not the answer when our own people are suffering.

The flag was raised by West Papuan legislators who had been promised independence by the then-colonial ruler, the Netherlands.

Although the Netherlands’ commitment did not come to fruition, the flag prepared for an independent West Papua continues to be a symbol of the desire for self-determination and independence for the West Papuan people.

2021 marks the 60th anniversary of the first flag raising.

In 1962, Indonesia invaded West Papua, an act later recognised by the United Nations General Assembly in 1969.

Since then, the raising of the Morning Star flag has been treated as a criminal offence.

It is a symbol of the ongoing struggle for West Papuan independence.

On this day each year marches, prayer services and flag-raising ceremonies are held to commemorate the first raising of the West Papuan national flag, the Bintang Kejora or Morning Star.