Some villagers in Lau still in shock after tsunami experience

Some villagers in Lau still in shock after tsunami experience 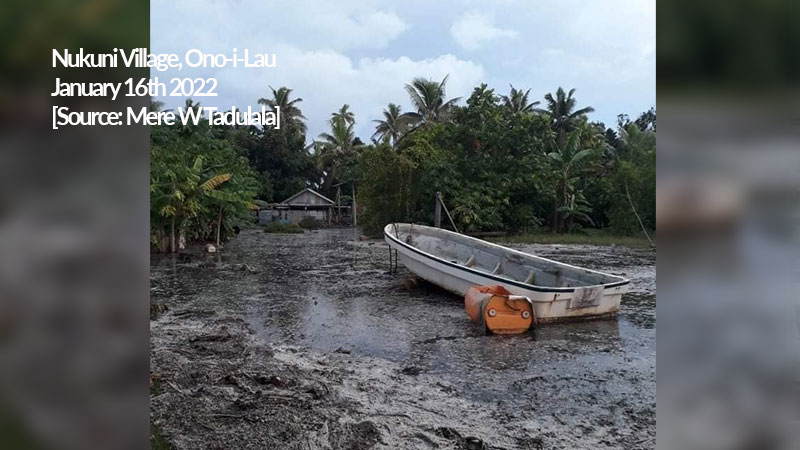 Villagers of Nukuni in Ono-I-Lau Island, Lau say they are still in shock after experiencing high tidal waves which damaged five houses following the eruption of an underwater volcano in Tonga on Saturday.

Villager Taufa Tagicaki Serevi says it was the first time for them to experience huge waves.

He says the waters entered the village and damaged some homes and outdoor kitchens for those living along the coast.

Serevi says those living along the coast were asked to evacuate to higher ground before the waves reached the village and now the shoreline is filled up with rubbish.

The villager says the clean-up campaign and rebuilding of damaged infrastructure has started around the village.

Serevi says they are thankful they are safe and no one was injured from this disaster.

Another villager, Komiami Kirisimasi says what he saw last Saturday was similar to the tsunami movies they always watch on television.

He says they are lucky that when the huge tidal waves hit the island, it was still low tide and families residing along the coast had evacuated to higher ground.

Kirisimasi says they used Ono Levu District School, the Post Office and the Health Centre as their evacuation centres.

He adds from Saturday until yesterday, they have not experienced any rain as they are aware of acid rain in the aftermath of a volcanic eruption.

Kirisimasi says they are thankful that their farms and food sources were not damaged by the disaster.

Meanwhile, a villager of Vanuavatu says they were lucky on Saturday to receive the call from the Lakeba Police Station to advise them to relocate to high ground due to the tsunami advisory.