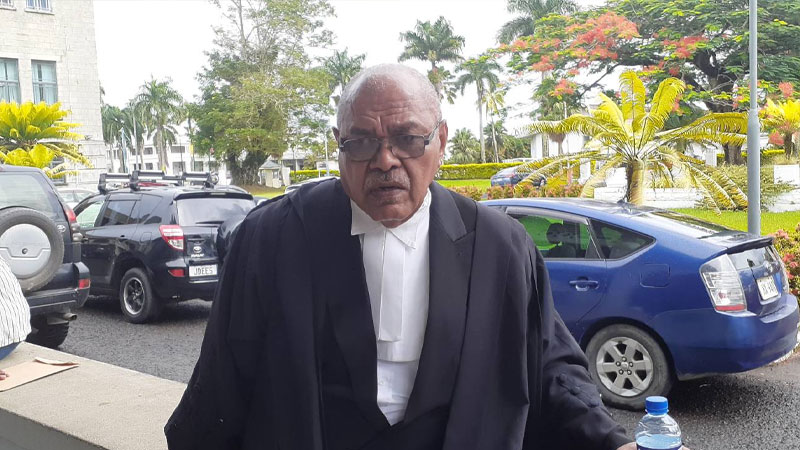 SODELPA MP Niko Nawaikula's lawyer, Sevuloni Valenitabua has told the court that the proceedings against Nawaikula are unlawful and invalid from the outset.

While making his closing submissions in the Suva High Court this morning, Valenitabua says the complaint was made by an anonymous person and remains unknown until today.

He says according to the Criminal Procedures Act, the complaint must be in writing and signed by the complainant but due to the fact that there is no complaint in writing, the criminal proceedings are unlawful.

Valenitabua further says Nawaikula was unlawfully arrested without a warrant on the 25th of August in 2019 in Buca Village and on the 29th of September in 2019 from Nadi.

He says falsely claiming allowances would have been summary offences and not indictable offences so a warrant was required by law to be issued.

He adds all processes consequential to the unlawful arrest is unlawful.

Valenitabua also told the court that Nawaikula filled and signed an MP declaration form on 10th April in 2019 to indicate to the Parliamentary Secretariat that his intended permanent address was Buca and the declaration was followed up by correspondences between the Secretary General and Nawaikula which resulted in his move to Buca.

Valenitabua adds that Nawaikula was born in Buca Village and he has his Yavusa, Mataqali, Tokatoka and family members in Buca.

The lawyer adds Nawaikula's intention to move to Buca and the permanent connection and permanent rights he has to Buca and his Yavusa as confirmed by his registration in the VKB confirm that his permanent residence and address is Buca Village.

Nawaikula allegedly falsely stated that his permanent place of residence was in Buca village, Buca Bay and allegedly obtained $20,201.35 between August 2019 and April 2020.

He is charged with one count of Giving False Information to a Public Servant and one count of Obtaining Financial Advantage.