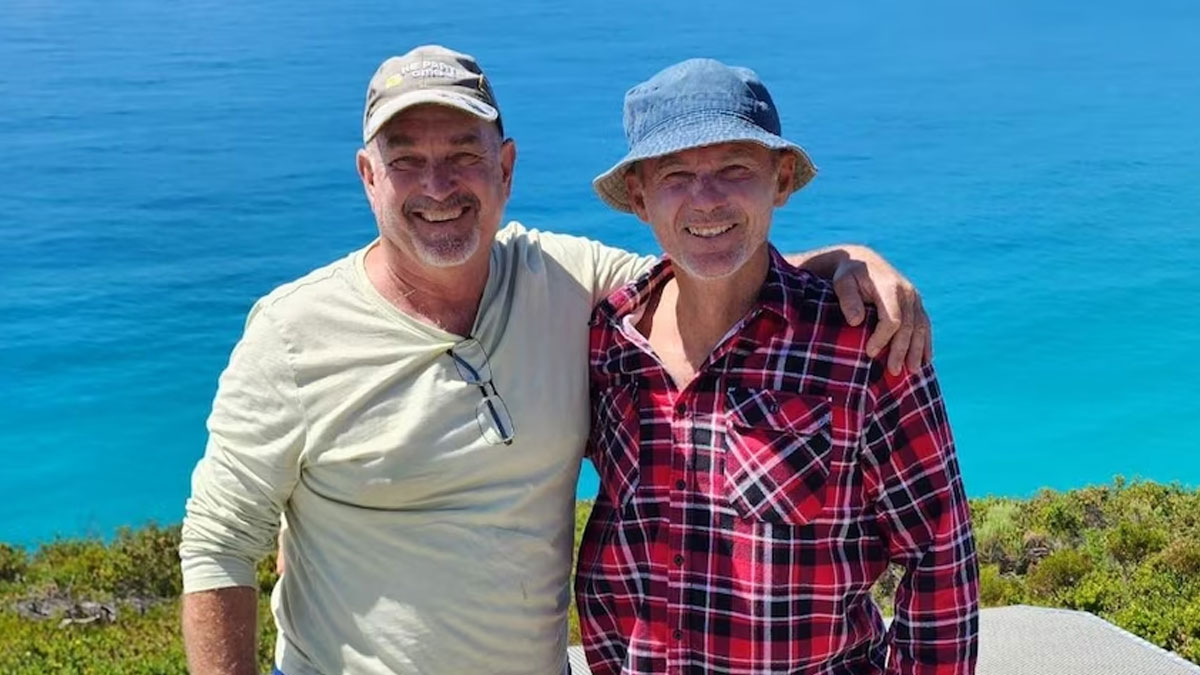 Frits Neumann and Arthur Sewell are lucky to be alive.(Supplied: Fritz Neumann)

Two men who almost drowned following a paragliding incident off Western Australia's south coast this month say they feel lucky to be alive after clinging onto slippery rocks and scaling a steep cliff to safety.

Fritz Neumann and Arthur Sewell each have more than a decade experience in paragliding.

The extreme sport allows people to run off cliffs and sail through the air with a parachute, reaching heights of up to 18,000ft.

But it was a familiar stretch of coastline in southern WA that they say almost cost them their lives.

The men were paragliding off the Sandpatch launch area in the beautiful but rugged Tornidirrup National Park and everything was smooth sailing.

Then the wind conditions changed, and Mr Neumann decided to take a different route.

The 59-year-old said he lost a lot of height when trying to get to Sharp Point, but a wave came over the cliff and slapped the wing of his parachute.

"My only options were either crashing onto the rocks or going in the water," Mr Neumann said.

He said he was winded following his hard collision with the ocean and his kit was pushing him face down into the water.

"I managed to turn sideways and get my head above the water to get a breath. Every time I looked up, I could just see this white water coming towards me. I thought okay, here we go … another 20 seconds underwater," he said.

Fighting for their lives

Mr Sewell saw Mr Neumann crash into the water and feared the worst.

He wanted to help so landed on a nearby beach and went out to try and rescue him.

But then he too found trouble.

Mr Sewell was hit by a wave and got washed off the rocks.

He ended up on the wrong side of a gap he was unable to cross and had to cling onto a submerged rock for more than three and a half hours.

Mr Sewell was grateful for his long-sleeve shirt saying it "stopped his body from getting cut up".

He didn't know if anyone was looking for him and tried to get the attention of beachgoers, but they didn't see him.

Mr Sewell did not know if Mr Neumann was alive.

Meanwhile, Mr Neumann managed to get himself out of the water and onto a nearby cliff.

He said his first hook knife was jammed but luckily, he had a secondary one hidden away.

He used that to cut the string and harness from his head and body and proceeded up the face of a steep cliff.

"I just shimmied up the cliff for the next four hours … every time I grabbed the limestone rocks they'd just break away," he said.

Mr Neumann reached the top and was met with emergency service crews.

But they still had not found Mr Sewell.

Albany Sea Rescue eventually located him and pulled him to safety.

"When I saw them, just the relief … I mean thanks doesn't seem quite adequate when people save your life," he said.

"I didn't know until they pulled me into the boat and they said, 'Your mate is safe'."

Mr Sewell expressed gratitude for everyone who helped in their rescue that day.

He spent the evening in hospital with hypothermia and several abrasions.

Mr Neumann said he thought he was going to drown three or four times.

"One thing that really surprised me is how calm I was, I sort of resigned myself to the fact that I've destroyed my family's life by killing myself this way. And said, well I'll try and get out of this," he said.

He said none of the men had mobile coverage and a member of the group had to scale rocks to get reception.

Mr Neumann said he would support calls for improved mobile coverage in the area.

"It would have got emergency services to us an hour earlier," he said.

A Telstra tower has been planned for the site for several years but is yet to be installed.

Boyd Brown, Telstra regional general manager for WA, said construction would hopefully begin in late April, to be completed by the end of May.

In August, Telstra told the ABC the site would be on air by March.

Mr Boyd put the delay down to finalising detailed technical designs, ordering of technology parts, many of which are sourced from overseas, booking in specialist construction contractors and liaising with local authorities.