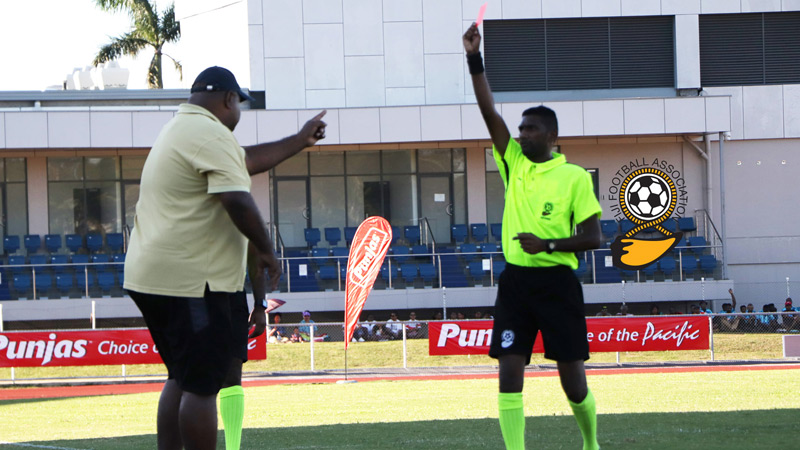 Go Fry Nasinu soccer team coach Tagi Vonolagi has been handed a two-match suspension and a fine of $163.50 for using abusive language towards a match official - [Photo: FFA]

Go Fry Nasinu soccer team coach Tagi Vonolagi has been handed a two-match suspension and a fine of $163.50 for using abusive language towards a match official in their Punjas Battle of the Giants match against Ba yesterday.

The incident happened after Ba was awarded a penalty in the first half.

Vonolagi says it is in the past and that things like this always happens in games.

The Nasinu coach is positive despite their 7-3 thrashing against Ba and has asked fans not to count them out just yet.

Vonolagi says Nasinu will come back fighting in their next two games against Suva and Labasa.

In other matches yesterday, in Group B, Nadi beat Navua 4-1 while Lautoka lost to Rewa 3-2. Nadi and Rewa now have three points each while Lautoka and Navua are yet to register a point.

In Group A, Ba leads the points table with 3 points. Labasa and Suva have one point each after their match ended 1-1.

Today, Nasinu will play Suva at 11am, Lautoka will face Navua at 1pm, Ba will take on Labasa at 3pm and Rewa will take on Nadi at 5pm.

You can catch the live commentaries of the Suva-Nasinu, Ba-Labasa and Rewa-Nadi matches on Radio Sargam.