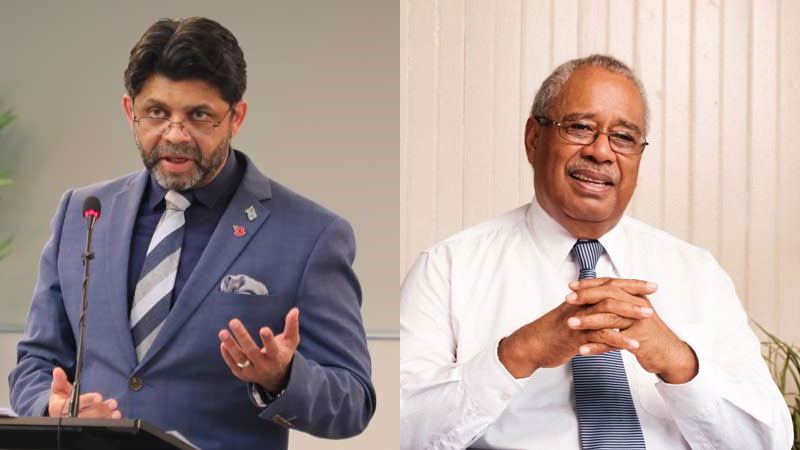 Acting Prime Minister and Minister for Economy, Aiyaz Sayed-Khaiyum says Unity Fiji Leader, Savenaca Narube who is rolling out his credentials saying he is correct as he is an economist, has been proven wrong time and time again and is selective about the data that is readily available on the International Monetary Fund and Reserve Bank of Fiji websites, however Narube says no amount of rhetoric by Sayed-Khaiyum will diminish his economic and financial qualifications and experience.

In a press conference yesterday, Sayed-Khaiyum said that Narube has simply come back with his qualifications as he has got his projections wrong.

The Minister for Economy says Narube has questioned the independence of the RBF and the Macroeconomic Committee who produced the forecast.

Sayed-Khaiyum says when it suited Narube, he used the forecast and when it didn't, he said they were not independent.

The Minister for Economy then said that Narube has been saying that he is the only Permanent Secretary for Finance to have a surplus budget.

Sayed-Khaiyum says the surplus budget in 1998 was only because the Government sold ATH shares to the FNPF at an inflated price and based on IMF definition, it was not a surplus but a one off sale of an asset.

He says it was a year where there was an underlying deficit.

Meanwhile, Narube says he wants to urge the Minister for Economy to stick to the evidence.

He says projections are never spot on but as one can see, the trend in the Minister’s forecasts is like a roller coaster and his is stable and closer to the actuals.

According to Narube, the Government’s original forecast for 2020 was -4 percent and later revised to -21 percent while the actual contraction was -15 percent.

Narube says Sayed-Khaiyum did not specify where he was wrong and perhaps because he does not even know himself.

The Unity Fiji Leader says he wants to repeat his earlier statement on whether Sayed-Khaiyum thinks he knows more without any economic and financial experience or qualifications.

Narube says he is not running the economy and Sayed-Khaiyum is and has questioned who is really dangerous to the country.

He further says the country is in grave danger when a person who does not know economics and finance is at the helm of our economy but it is even more dangerous if the person at the helm does not know but believes he does.

Narube says no one is perfect and he may be wrong in his commentary of the economy and will concede when he is wrong, but it is extremely dangerous when the Minister for Economy never concedes that he is wrong.

Narube further states that Sayed-Khaiyum has built economic growth on the unsustainable foundation of Government expenditure and as a result, ran out of fiscal space before the virus hit, wasted scarce taxpayers’ money on his political expenditure and this wastage would not impact economic growth which would not generate more revenue to help service the ballooning national debt.

Narube adds Sayed-Khaiyum ignored the resource-based sectors which worsened the decline in the economy when the virus destroyed tourism, his incentives to raise demand in its budget in the first wave were ineffective because they were conventional and targeted at tourism, and Sayed-Khaiyum has not helped the private sector by intervening heavily in businesses.

The Unity Fiji Leader adds Government sold TFL in 1998 to ATH but he as the Permanent Secretary for Finance, did not spend the proceeds and instead, applied the proceeds to prepay debt.

Narube says this was why the overall budget balance was in surplus and this is prudent financial management.

He says in comparison, the Minister for Economy has been selling national assets, but he has been spending the proceeds and borrowing more which is dangerous.

Narube adds Sayed-Khaiyum has failed miserably in steering the country economically and financially as 300,000 people are living in poverty and COVID is not the only reason we are in the mess we are in now.