AG responds to our question by saying if tomorrow Biman Prasad said the cow jumped over the moon, fijivillage would make it a news item

AG responds to our question by saying if tomorrow Biman Prasad said the cow jumped over the moon, fijivillage would make it a news item 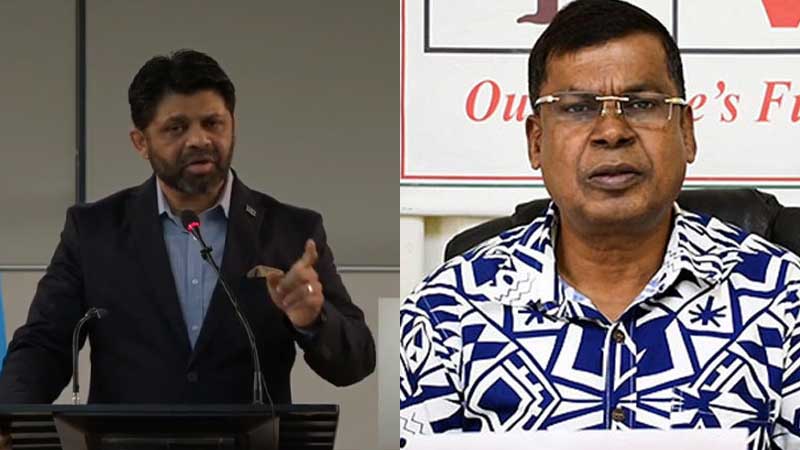 National Federation Party Leader Professor Biman Prasad says every time Attorney General Aiyaz Sayed-Khaiyum loses an argument he decides this is a matter for Government action while Sayed-Khaiyum says the problem is that when you find people who start off a news release by attacking somebody personally, you know there is not much merit in it and it also goes to show there is not much merit in what they are going to say.

Professor Prasad says when the University of the South Pacific Council voted overwhelmingly to re-appoint Professor Pal Ahluwalia, Sayed-Khaiyum announced the Fijian Government would withhold millions of dollars in financial commitments to USP.

Professor Prasad further says lack of funds will damage the quality of USP’s teaching and its international reputation.

He adds 75% of USP’s students are Fiji citizens and it is the quality of their learning and their degrees that will be reduced.

Professor Prasad says now the Supervisor of Elections has lost the Niko Nawaikula case and Sayed-Khaiyum has lashed out at the lawyers in his own department, blaming them.

He says Sayed-Khaiyum has said he will change the law to suit his view of the case.

Professor Prasad also says this means that thousands of people will be forced to amend their birth certificates just so that they can vote in the next election.

The NFP Leader adds this is a sign of a man who has held power for too long and believes that all of Fiji belongs to him and if the Prime Minister won’t fire him, the people of Fiji will have to do the job in 2022.

When questioned by fijivillage on the statement by Prasad, Sayed-Khaiyum says fijivillage is now well known to give NFP space for anything that they say.

Sayed-Khaiyum says they have made their position known for the past two years regarding the governance issues at USP and it is not a question of getting your own way.

He says their way was that they must have good governance, accountability and that people must be appointed based on due process.

Sayed-Khaiyum says the voter list is the record to show how many voters are registered against whom the ballot papers are printed and people go and vote.

He says by allowing aliases to be on the voter list, you give one individual to perhaps register two or three times.

Sayed-Khaiyum says that fundamentally undermines the integrity of the voter list.

He says the Solicitor General’s Office is an independent office adding that is what they have been saying the past number of years.

Sayed-Khaiyum says the opposition have been accusing the Solicitor General and his office of not being independent and now that it suits them, it is independent.

Sayed-Khaiyum says if you look at the past governments, the Solicitor General has represented the Supervisor of Elections.

He further says he believes in his opinion that it was the responsibility of both sets of counsel to be able to represent and argue the constitutional provisions in the Niko Nawaikula case.

Meanwhile, Chief Justice Kamal Kumar had ruled that Niko Nawaikula is to be reinstated as a Member of Parliament from 23rd July, 2021.

While delivering the judgement, Chief Justice Kumar said the name on Nawaikula’s birth certificate is Nikolau Tuiqamea but he has been using the surname Nawaikula since he was a child.

Chief Justice Kumar stated that based on the current law, Nawaikula was not legally required to provide his name on his birth certificate to be registered as a voter.

He adds that Nawaikula had provided his driver’s license while registering which was accepted by the registering officer.

Nawaikula gave affidavit evidence that he has used and is known by the surname "Nawaikula" from his childhood through to primary school, secondary school, university and his election to Parliament in 2014 and 2018. He has been on the National Register of Voters by that name.

The Chief Justice says the policies of the Fijian Elections Office has to be in line with the law. He ruled that the Supervisor’s actions in removing Nawaikula’s name from the Register of Voters is unlawful and wrongful.

Supervisor of Elections Mohammed Saneem says the Fijian Elections Office joins the Electoral Commission in welcoming the announcement by the Attorney General in relation to the amendments to provisions governing the registration of voters in Fiji.

In a statement, Saneem says the voter list is the final product in the voter registration process and the voter list in an election is regarded as the most important administrative component as it contains the final list of voters that are permitted to vote at that particular polling station.

Saneem says one of the basic tenets of ‘free and fair’ elections is a clean, complete and current voter list adding that the voter list must be maintained in a transparent manner and the election management body, in this case the Elections Office, is held accountable for ensuring that the voter list is regularly updated, consistently verified to ensure its accuracy and correctness, is accessible and where possible published so that it can be scrutinized.

Following the comments made about fijivillage by Sayed-Khaiyum, please note fijivillage and CFL’s 5 radio stations always stand for balance, fairness and accuracy. We have never stood for or supported bias or personal political agenda.

We provide balanced coverage and everyone is given a right to respond as required under the Media Code of Ethics which is part of the Media Industry Development Act.