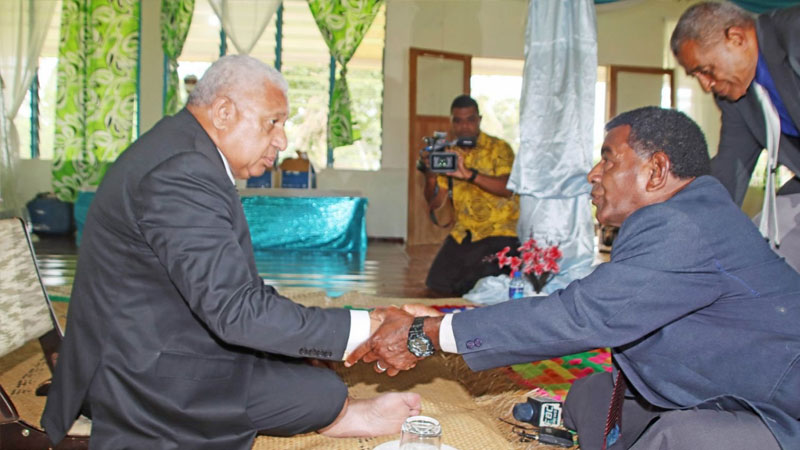 My opponents see their political doom in the success we have created together in partnership with the communities in Bua, so they lie, twist and distort the facts.

This was highlighted by Prime Minister Voreqe Bainimarama while speaking at the Bua Provincial Council Meeting in Lomanikoro Village in Bua.

He says nothing speaks louder than the strong and consistent returns landowners receive from their resources and for eight consecutive years, landowners have achieved massive returns and no one can argue with that.

Bainimarama says this success could easily be undone if the nation were steered by politicians who are uncaring and who only make short-sighted decisions that serve the elites and the corrupt.

He adds the history of the Bua Provincial Company shows them how bad things can get because not long ago, the provincial funds which the people worked hard for years to collect, were wasted.

The Prime Minister questioned the people if they remember when $350,000 disappeared into thin air and also told them that we cannot fall back to those dark days of incompetence and outright corruption.

Bainimarama adds when iTaukei lands were allowed to be lost under previous Governments through some ill-conceived legislation, they strengthened the protection of iTaukei lands under the 2013 Constitution.

The Prime Minister also told the people present that there are people in Fiji who want to undo the great work they have done together because it threatens their interests and, most importantly, it threatens the unfair privilege they thought they and their descendants, and their cronies, would wield forever.

He says he looks forward to the future because there is so much we can do together to take the Province of Bua forward.

Bainimarama assured the people that the Fijian economy is strong today because it stands on the unshakable foundation of our Fijian Constitution.

The marginalized, at risk and poor in the community will now be able to get much needed support through the opening of DHIVE Community Centre in Marti... 24 minutes ago
LATEST NEWS