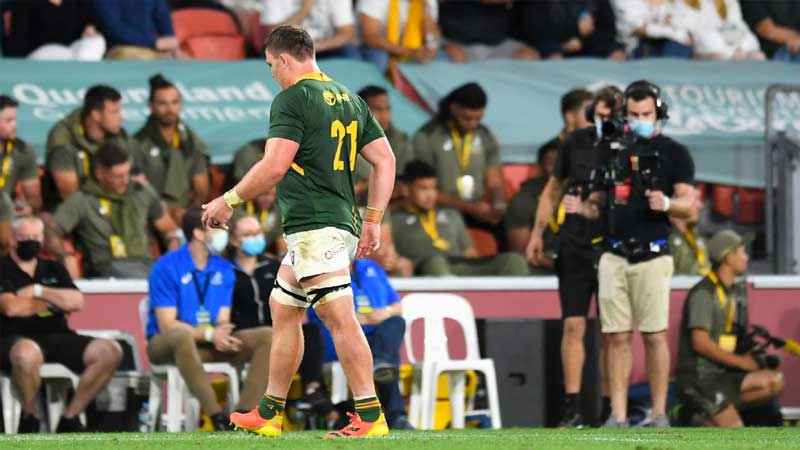 Jasper Wiese leaves the field after he was sin-binned for dangerous play during South Africa's Rugby Championship loss to Australia in Brisbane, September 18, 2021 Albert Perez/Getty Images

Springboks back-rower Jasper Wiese has been cleared by the SANZAAR Judiciary Committee over a dangerous clean-out on Wallabies centre Samu Kerevi, however, the 25-year-old will still miss this week's centurion Test against New Zealand.

Wiese received a yellow card during the final minutes of Australia's 30-17 win over the world champions for making contact with the head of Kerevi at the ruck.

He was referred to the Judiciary for the incident as SANZAAR's Citing Commissioner deemed in his opinion the incident had met the Red Card threshold for foul play.

Judicial Committee Chair Michael Heron ruled that while the Australian player was vulnerable, the contact with the head was not intentional or highly reckless.

He says the Australian player was uninjured and his statement suggested the contact looked more serious than it was.

He adds there was no adverse reaction by any of the players and the referee was in a good position to see the actions of Wiese.

Judicial Committee Chair says Wiese is free to play in the upcoming matches.

However, the timing of the decision means Wiese will still miss the centurion game against the All Blacks regardless, with South Africa naming their team late Tuesday evening.

This forced coach Jacques Nienaber to leave him out of the side, expressing his frustration with the system.

The Springboks will meet the All Blacks at 7.05pm Saturday and the Wallabies will face Argentina at 10.05pm Saturday.

Opposition Leader, Ratu Naiqama Lalabalavu says the Government should consider other practical options than to increase the Government guarantee for ... 46 minutes ago

Attorney General, Aiyaz Sayed-Khaiyum says with the recent issue of new shares, the Fijian Government is the majority shareholder of Fiji Airways ... 52 minutes ago

FICAC is expected to make an application in court this afternoon to expedite the hearing in the case where 6 SODELPA Members of Parliament and a ... 2 hours ago

Minister for Education Premila Kumar says the quality of teachers from all teacher training institutions in the country has not been up to standard ... 2 hours ago