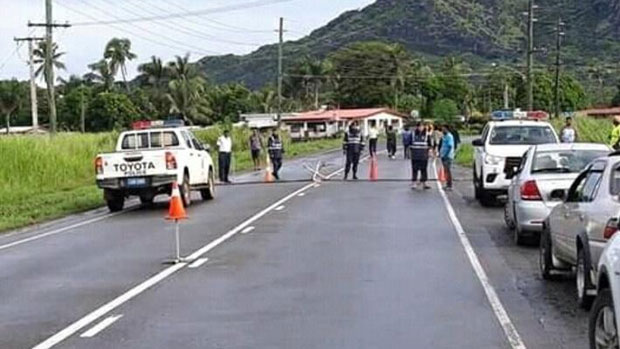 Police check point outside the lockdown area of Lautoka

Voreqe Bainimarama says if you have been directed to self-quarantine and you’re hearing this message, ask yourself: Where would you rather be? Quarantined in the comfort of your home for 14 days, or in prison for violating the law?

He says police are actively investigating reports that 36 Fiji Airways flight attendants have blatantly violated their self-quarantine, sharing grog and interacting with their friends and caregivers from outside the quarantine area.

Bainimarama has a message to those people “To those not following our instructions, I have to ask: Is this a joke to you? What in God’s name are you thinking? While Fijians in Lautoka are living under lockdown, while our health workers work day and night to test and treat patients, and while the elderly are restricted to their homes, these Fijians are spitting on all of the sacrifices their fellow Fijians are making to keep our country safe.”

He says it is not simply a “nice thing to do”.

The Prime Minister says it is a compulsory, legally-mandated order, and these Fijians will be investigated.

Bainimarama has also made it clear that if necessary, they will be arrested, charged and punished accordingly.

The Prime Minister says in Fiji, being a flight attendant is a highly-competitive job, hundreds, if not thousands, of Fijians, strive for each position filled. He says it should be a position you hold with pride and one you don’t take for granted.

He says if irresponsible behaviour like this continues, Fiji Airways should not hesitate to clean house and replace these people with people who take their duty of care seriously.

Bainimarama says their behaviour in-flight and the protective measures that they take to ensure the safety of their cabin should be no different than they are on the ground when they are caring for their own community.

A 31-year-old woman from Lautoka is the 5th confirmed COVID-19 case in Fiji.

Prime Minister Voreqe Bainimarama says their contact tracing team confirms that the woman attended a Zumba class with the 27-year-old flight attendant who was the first confirmed COVID-19 case in Fiji and while he was already displaying the symptoms.

Bainimarama says all members of that Zumba class were directed to self-quarantine the same day the first patient was diagnosed, the 19th of March.

They were each instructed to immediately alert the Health Ministry medical teams if they began developing symptoms.

Fiji has confirmed our fifth case of #COVID19, another direct contact of our first patient.

She is 31-year-old woman who first developed symptoms while self-quarantined.

The average age of our 5 cases is just 27. Anyone at any age can be a carrier. We must all remain vigilant.

During their Zumba class, she worked out in close proximity with the first patient and shared a hug.

When she later recognised her symptoms, she notified the ministry’s rapid response medical teams, who securely and hygienically transported her via ambulance to the isolation ward at Lautoka Hospital.

Bainimarama says the woman shares a household with nine others –– two of whom were also showing symptoms and have been isolated in Lautoka Hospital.

The other seven remain under strict quarantine in the home, which is under constant police surveillance.

Prime Minister Voreqe Bainimarama confirms that they had to do further contact tracing in relation to the first confirmed COVID-19 case as their investigations revealed that unfortunately, they were not given the full story.

Bainimarama says witnesses have told the Ministry of Health that the flight attendant had been showing symptoms, including coughing, days prior and that he failed to place himself in self-quarantine.

He says their contact tracing had to be extended further back to identify even more people he may have contacted and get them into quarantine as well. The Prime Minister says this is water under the bridge; none of us should waste time targeting or vilifying the first patient as we all have much more important work to focus on.

He confirms that most of the individuals they have had to contact have been placed in compulsory self-quarantine.

However, there are still six individuals, all in the Western Division, who have yet to come forward.

Prime Minister, Voreqe Bainimarama says they are working overtime to avoid the nightmare scenario in countries like Italy.

Bainimarama says the government is quickly acquiring new Intensive Care beds and ventilators, and taking other measures that will be announced by Attorney-General and Minister for Economy, Aiyaz Sayed-Khaiyum in tonight’s supplementary budget address at 7.30pm.

He says the fact is, if what happened in Italy happens in Fiji, our healthcare system would buckle.

Bainimarama says the grim reality is that in Fiji, the number of deaths for this many cases would likely be much, much higher.

He says Fiji is at war with the coronavirus.

Bainimarama says we cannot see our enemy but we must act as if the enemy is in our midst at all times.

He says you can join the fight by washing your hands with soap and water, practicing physical distancing, two metres distance is safest and following any and every directive given to you by authorities.

From tomorrow, Nadi Airport will be officially shut down to all scheduled passenger travel.

There are currently three flights inbound to Fiji carrying Fijians returning home from overseas, these passengers will all be required to self-quarantine for 14 days upon the arrival.

Bainimarama says they are seriously concerned about the virus ever reaching any of our outer island communities.

From this Sunday, the 29th of March, all passenger travel to the outer islands will cease.

Shipping lines for freight will continue with increased bulk but decreased frequency to ensure food and other essential goods are supplied across the islands.

The ban on gatherings of 20 or more people remains in effect.

If you have a death in the family, you can proceed with a burial, so long as you limit any gatherings to fewer than 20 people. 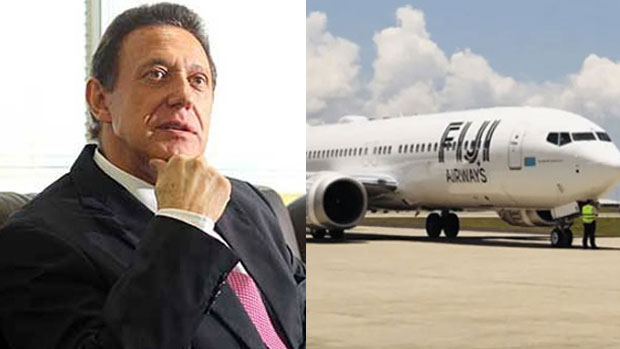 The Managing Director and CEO of Fiji Airways, Andre Viljoen says if found guilty after due process, the Fiji Airways staff that allegedly disregarded the self-quarantine directives of the Fijian Government, will have no place in the National Airline and this includes any breaches in the past two weeks and any in the future.

In an internal email to all staff last night, Viljoen says he is disappointed beyond measure and Police will continue with their investigations and they will give them every assistance required.

The 36 flight attendants who are on self-quarantine at a Nadi hotel were allegedly having grog sessions with people from outside almost every night and other people were also bringing over food, clothes and snacks to them.

Viljoen says Fiji Airways will return to the skies once this crisis is over but if some of its staff flaunt Government directives or internal Fiji Airways Safety rules, they will not return.

The CEO says that he shares the disappointment and embarrassment that most members of the Fiji Airways family are feeling today.

He says when the Lautoka Containment Zone was implemented, they accommodated staff who could not reach their homes in Lautoka at a hotel in Nadi.

Viljoen says he finds it hard to understand why anyone would behave so recklessly as everyone arriving from a layover was told by Health Officials on the need to self-quarantine either at their own homes or at the hotel.

He says these are not normal times and for a week, everyone has been made aware of the rules surrounding self-quarantine.

Viljoen says they have colleagues in Lautoka right now in the confinement zone and are unable to get to work.

He says that his focus in the past few weeks as this crisis grew, has been to ensure that Fiji Airways survives in a world where many other airlines will not, to save jobs when many are already letting people go.

He says all this good work, all these responsible actions by almost 1,500 members of the Fiji Airways family, are tarnished by the actions of just a handful.

All students will progress to the next level in the next academic year which will have four school terms. Minister for Education Premila Kumar says... 11 hours ago
LATEST NEWS

The Ministry of Health and Medical Services confirms the COVID-19 vaccination programme for children has been deferred to Monday 4th October 2021 to ... 10 hours ago

The United States of America, through USAID has partnered with SPC to launch a new activity called Promoting Just, Engaged, Civic-minded and ... 10 hours ago

The Education Ministry says as of 24th September, 4,669 staff of the Ministry are now fully vaccinated while 8,524 staff have received their first ... 10 hours ago

Pastor Rajesh Goundar of El-Shaddai Assemblies Of God Church in Wairabetia, Lautoka is seeking forgiveness from those who have been hurt by his ... 11 hours ago

Prime Minister, Voreqe Bainimarama has confirmed with 70 percent of adults now fully vaccinated in Fiji, the curfew hours will be 10pm to 4am from ... 11 hours ago
More News
TOP