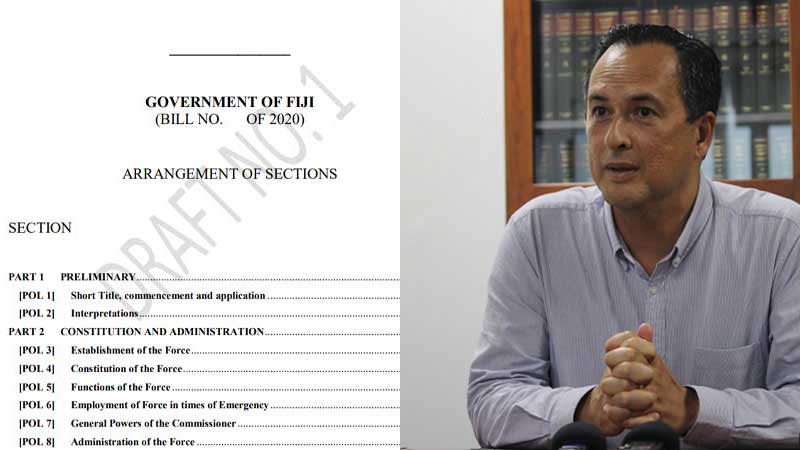 The Fiji Law Society says the wide scope of the proposed police powers in the Draft Police Bill are inconsistent with values of respect for human rights, freedom and the rule of law.

Fiji Law Society President Wylie Clarke says it is understandable that Police powers need to be modernised to meet today’s circumstances, particularly having regard to technology that did not exist in 1965 when the current Police Act was enacted.

Clarke says however, the increased Police powers go well beyond this and potentially affect fundamental human rights set out in the Constitution and international conventions which Fiji has signed.

He says the proposed bill may also conflict with provisions of the Criminal Procedure Act and common law rights to personal and real property and privacy.

Clarke adds the Fiji Law Society has also previously expressed its concern about the increasingly frequent allegations of police brutality and take note of other allegations regarding the unreasonable detention of persons for up to forty-eight hours.

He says against this backdrop, the immunity afforded to police officers under the draft bill’s proposed terms must therefore also be carefully scrutinised.

Clarke says the Fiji Law Society commends the Ministry of Defence and National Security and Policing for commencing a public consultation process.

He adds however, this consultation process must not stop here.

The Fiji Law Society President says they do not understand why face to face consultations are currently restricted to the maritime islands and rural areas and that people living in urban areas are to provide their submissions online.

Clarke says they do not believe this is enough.

He stresses that a proper consultation process should enable all citizens to have an opportunity to make their submissions in person.

Clarke adds a proper public consultation process must also start with information, written in a simple and accessible way, that enables all members of the public, not just lawyers, to understand what is set out in the draft bill.

He stresses the Draft Police Bill will impact everyone in Fiji so it is critical that the public understands exactly what the draft bill proposes.

Clarke further says public consultation must also continue when the proposed bill is introduced in Parliament.

He says the Fiji Law Society hopes that the Draft Police Bill will be referred to a Parliamentary Standing Committee for review and to receive submissions from the public.

Clarke also says this process will help ensure that Parliament clearly understands the impact, and the public’s views, of the draft bill.

He says the Society will be making submissions and will comment further on the Draft Police Bill in coming weeks.

We have reached out to the Minister for Defence, National Security and Policing Inia Seruiratu for a response to the statement by the Fiji Law Society.

Eleven locations have been identified for the first round of face to face public consultations on the Draft Police Bill.

It will start today at the Lomaiviti Provincial Council Hall in Levuka from 12pm to 4pm.

The first round of face to face public consultations will run from today till the 31st of this month. Online submissions will close on 3rd April.