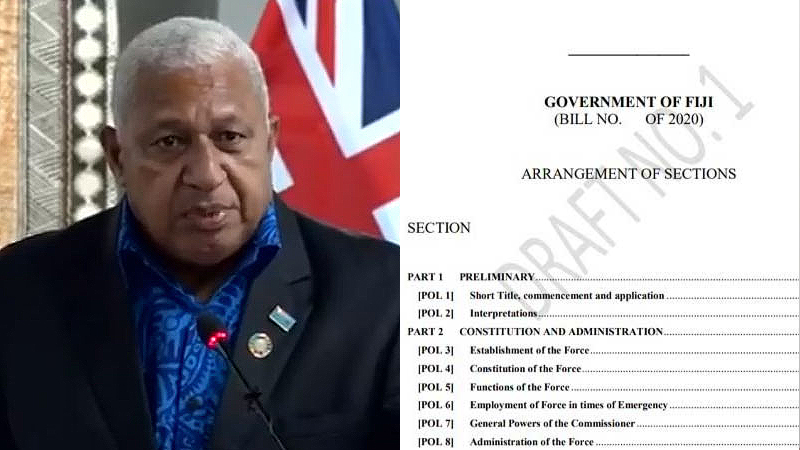 Prime Minister Voreqe Bainimarama has confirmed to fijivillage that the government has retracted consultations on the Draft Police Bill.

Bainimarama says the draft bill was not endorsed by the Solicitor General and cabinet.

He says what was endorsed was consultation on the old Police Act 1965, not on a Draft Police Bill.

The Prime Minister says the draft bill was prepared by Police and the contents of the draft do not represent government policy.

While many people accept the Police Act needs to be modernised, they had raised serious concerns about some sections of the now retracted Draft Police Bill after it was made public.

The draft bill had proposed that a police officer or special constable will be able to search a crime scene and seize potential evidence without a warrant.

The proposed law said a police officer or special constable may search any person, animal, vehicle or vessel at the crime scene or in the immediate vicinity of such crime scene.

The Draft Police Bill also said any police officer or any other authorized police employee may seize, without warrant, any electronic storage device which is found in any crime scene or in the possession of any person detained or arrested or anywhere in any public place.

There were also provisions in the Draft Police Bill to deploy police as soldiers subjected to military law during emergency situations.

The draft bill empowered the President to employ the Police Force and subject it to military law during an emergency or war.

It defined emergency situation as natural disasters, man-made disasters and any other situation which give rise to or may give rise to casualties, and or damage or loss of property, infrastructure, essential services or affects the means of livelihood or health or the general wellbeing of the public on a scale which is beyond the normal capacity of the affected communities to cope with unaided.

Concerns were also raised on provisions like the imposition of upto life imprisonment or $1 million fine on people who refuse to provide passwords of their electronic devices, police being allowed to eavesdrop and record conversations and recruitment of informers through lure of payment.