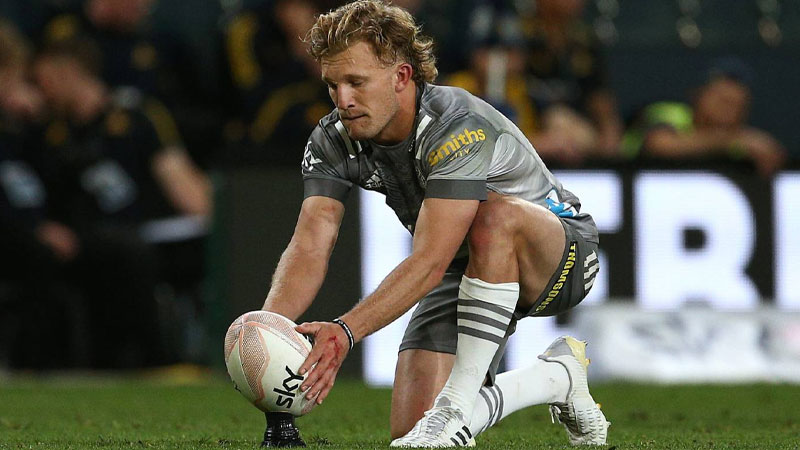 Damian McKenzie had no problems filling the big boots of Beauden Barrett as he made an impressive start to his Japanese club rugby career.

McKenzie, taking over from fellow All Black Barrett as the star import at the Tokyo Sungoliath was instrumental in their 60-46 win over the Brave Lupus in the opening weekend of the revamped 2022 League One season.

Playing at fullback, he sparked plenty of counter-attacks in the high-scoring affair.

Recalled Wallaby Sean McMahon scored three tries for the Sungoliath who are looking to go one better this year after finishing runner-up in 2021.

Meanwhile, controversial Australian cross-code star Israel Folau, made a winning return to rugby as he joined the Japanese scene.

He scored two tries in the Shining Arcs Tokyo-Bay Urayasu’s 24-23 win over the Kobelco Kobe Steelers.

Israel Folau showed his old form in a new start with rugby in Japan.

It was Folau’s first official rugby game since his controversial split with Rugby Australia in 2019. He has played league in France and on the Gold Coast since then but is now back in business in Japan.

The kick-off to the 2022 season wasn’t without problems with Robbie Deans’ champion Saitama Wild Knights forced to forfeit their game against the Kubota Spears because of player inviolabilities due to the Covid pandemic.

Fijian Drua centre Kalaveti Ravouvou who will make his debut for the Vodafone Flying Fijians this afternoon is relishing the opportunity to play again... 1 hour ago
LATEST NEWS