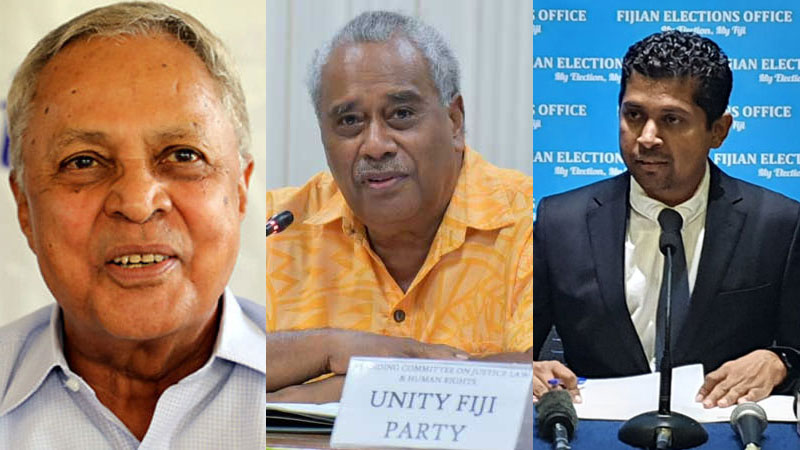 The Leader of Fiji Labour Party Mahendra Chaudhry and Unity Fiji Leader Savenaca Narube say they feel that they should boycott meetings called by the Supervisor of Elections Mohammed Saneem.

Narube says he had initially sent an email before a meeting last Friday asking the leaders of political parties on the stance they should have on meetings called by the Supervisor and as for him personally, they should boycott the meeting because of the situation at hand.

Narube says all the political leaders except for Rabuka had signed a letter addressed to the Chairman of the Constitutional Offices Commission complaining about the alleged misbehaviour of the Supervisor.

He says he thought that it was just right to get back to these leaders and get their views.

The email from Narube states “I have asked our colleagues for their stance for the meeting tomorrow. They will consider it and get back to me hopefully by tomorrow. My view is that we must take a stand now and boycott meetings with the SOE. But we must all agree, otherwise it will not be effective.”

When questioned by fijivillage as to why he was asking others to boycott the political parties meeting with the Elections Office, Narube says the boycott is a privilege that is open to everyone.

He says it is their right to do what they think should be done and it is not breaking any law.

An email sent by Chaudhry states “Can you please talk to party leaders to boycott meetings called by Saneem until such time as the Electoral Commission grants us an audience.”

When questioned, Chaudhry told fijivillage that he shares Narube’s sentiments as they have taken the matter to court.

He says the Electoral Commission has the responsibility for the conduct of elections and voter registration and this must not be delegated to the Supervisor so they insisted that the Chairman chaired the meeting.

Chaudhry says FLP did not attend the meeting as a show of protest but he is glad that they were able to persuade the Chairman of the Electoral Commission to attend and chair the meeting.

Meanwhile, the Fijian Elections Office has condemned the attempts made by Narube and Chaudhry to try and derail the FEO’s political party meeting by lobbying for a boycott of this meeting.

Supervisor of Elections Mohammed Saneem has said that 6 of the 7 political parties attended the meeting with at least 2 representatives while Fiji Labour Party did not attend.

Saneem says the meetings between the FEO and political parties provide the platform for the free flow of information and it is inappropriate for a political party to promote non-attendance.

More Fijians are expected to get employment opportunities in Australia after Labour Solutions Australia interviewed 56 potential workers since ... 5 minutes ago