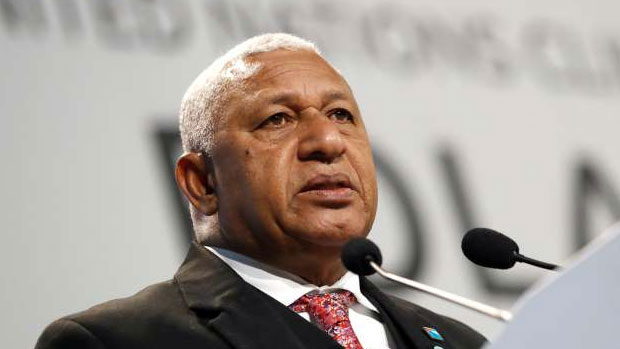 Prime Minister Voreqe Bainimarama says he was both sickened and outraged when he saw a video from last year at Ratu Kadavulevu School that was circulating online, showing a student being brutally beaten and bullied by his classmates.

Bainimarama says it broke his heart as he saw his own children and grandchildren in the student that was beaten up.

The Prime Minister says while police are investigating the matter, he wants to make it clear that Fiji should have zero tolerance for this merciless behaviour.

He says teachers alone can’t stop abuse adding this is a breakdown in our social values, and we need to fight it at every level, from government, school, and at home.

The Prime Minister is asking students not to view the vulnerable as an easy target for picking on or beating as that doesn’t make anyone tough but it makes a coward.

He says true strength comes from speaking out, standing up and protecting those who need it most.

Bainimarama says parents know that this abuse too often starts from home and they need to make it clear that wherever their children are, they must treat all Fijians with kindness and respect.

He has also asked teachers to work to create a culture of trust and love in their classrooms that combats this behaviour before it starts.

The Ministry of Education says it strongly condemns violence in any form, and in view of the recent cases reported by the media, would like to reiterate and reinforce that there is a zero-tolerance policy on any form of violence or abuse in schools.

The Ministry says children who are victims of bullying often suffer from long-term trauma beyond the initial incident, including low self-esteem, behavioral problems and an inability to concentrate and perform to their full potential at school.

They say in some tragic cases, it can cause lifelong mental health issues and lead to self-harm, and it’s important to realise that bullying isn’t limited to physical violence; often, verbal attacks and emotional suffering are just as dangerous.

The Education Ministry says the Fijian public must work together to break the stigma around reporting bullying, and recognise that doing so is an act of courage.

The Ministry encourages children who witness or experience bullying to come forward and report acts of physical or verbal abuse to their Head of School, or dial the Child Help Line service (1325), which allows them to remain anonymous if they choose.

Once an incident is reported, it is mandatory for Heads of Schools to report the matter to the Fiji Police Force, take the student(s) for medical examination, and duly inform the parents of the children.

The Education Ministry says Heads of Schools are tasked by the Ministry to take up such responsibilities and ownership.

It has also stated that any incident that is in breach of the Disciplinary Policy should be reported by the Heads of Schools to the Ministry within the first hour of the incident.

The Ministry recognizes that such behavior cannot be stopped by teachers alone, and is calling on parents, students, community leaders and all members of the public to work together in combatting bullying for the sake of our children and our society as a whole.

The Ministry also sends a message to those students suffering from bullying - please know that while the pain sometimes feels like too much to bear, your lives will get better, and thousands of parents, teachers and students stand behind you with love and compassion. We are here to support you.

There are long lines of people outside supermarkets and neighbourhood shops this morning. Many are lining up to buy bread and other ... 20 minutes ago