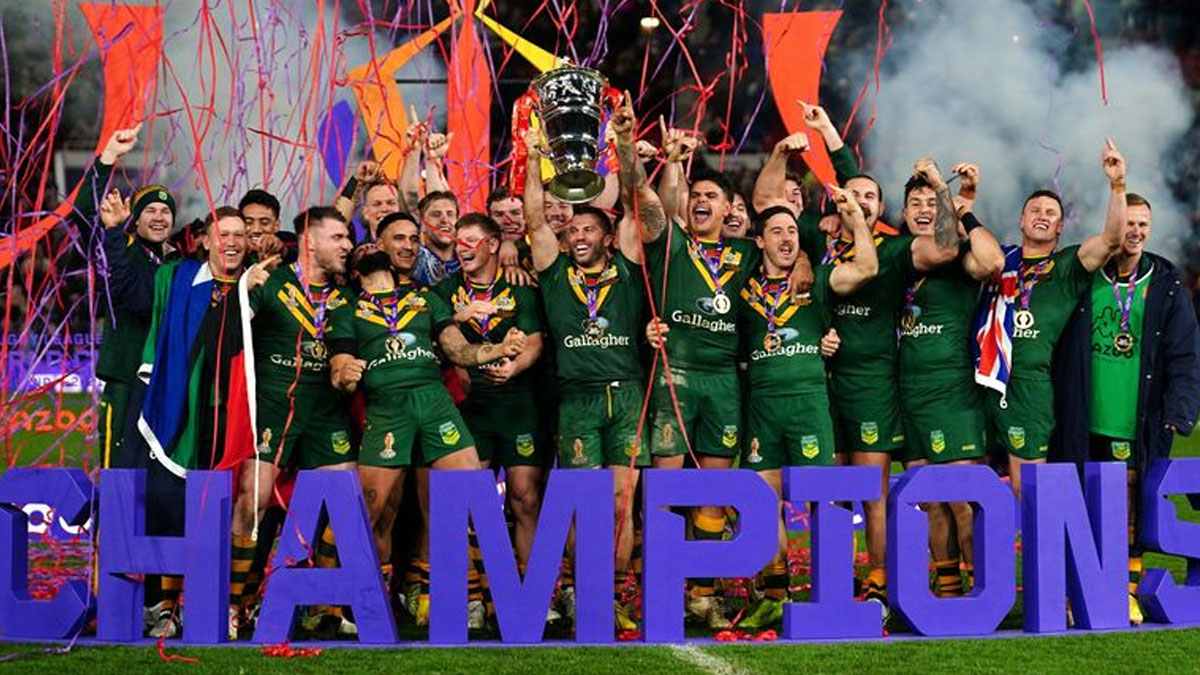 Australia has claimed a third consecutive Rugby League World Cup title after a a hard-fought 30-10 victory over Samoa at Old Trafford.

While the Pacific Islanders enjoyed the backing of the 67,502 crowd, Mal Meninga's relentless side more than lived up to their billing as overwhelming favourites.

A superb defensive performance laid the foundations for the Kangaroos, who have now won the competition 12 times.

He says they have had a long year but have been rewarded for effort tonight.

After repelling some early Samoa pressure, Australia took a healthy 14-0 lead into the interval with tries from Latrell Mitchell, James Tedesco and Liam Martin.

And while they were temporarily reduced to 12 men when Angus Crichton was sin-binned for an infringement on Chanel Harris-Tavita, they were still able to withstand several Samoa breaks before going further ahead when Cameron Murray went over in the left corner.

Brian To'o's try briefly raised hopes of a fightback from Samoa, but they were quickly snuffed out as Nathan Cleary and Cameron Munster cleverly combined to send Tedesco racing in on the angle into the left corner.

Stephen Crichton, the golden point hero against England in the semi-final, ensured a respectable scoreline for Samoa in their first World Cup final with a fine interception try for the second week running.

But it was not enough to prevent Australia from maintaining their stranglehold on the tournament as Mitchell went over in the closing moments to round off the scoring hours after the Jillaroos won the women's tournament for a record-equalling third time.

Samoa head coach Matt Parish says they are disappointed with the result but he couldn't be prouder of the effort and commitment to the cause.

He says they played a champion team and just ran out of juice and adds they just couldn't quite get close enough to put pressure on but he is really proud of this group as rhey kept trying until the end.

Australia's men came into the tournament not having played an international since 2019, largely because of COVID restrictions.

Tedesco was the player of the match.

The Permanent Secretary for the Ministry of Waterways and Environment, Mere Lakeba, says the symposium provides an opportunity for people to ... 15 minutes ago

The Minister for Employment, Productivity and Industrial Relation, Agni Deo Singh, says there were hindrances in the past regarding the Employment ... 21 minutes ago

A father and daughter duo, have enrolled for undergraduate studies at The University of the South Pacific. 47-year-old Ratu Soqosoqo says he could ... 25 minutes ago