As tourists arrive from today, a lot of people have returned to work and there is a real buzz of activity – AG

As tourists arrive from today, a lot of people have returned to work and there is a real buzz of activity – AG 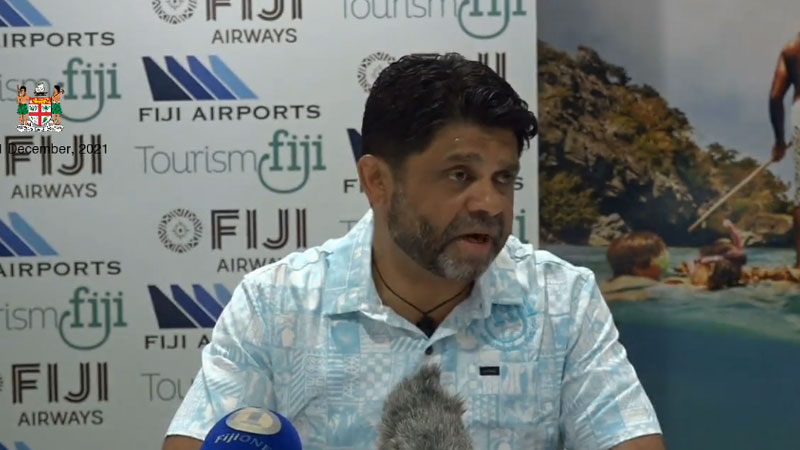 As the international visitors start arriving in the country from today, Attorney General, Aiyaz Sayed-Khaiyum says as the planes arrive, a lot of people have returned to work and there is a real buzz of activity.

Speaking in Nadi, Sayed-Khaiyum says this has affected many people in a positive manner.

He says the Government saw the big picture, they had a strategy in place, they had a path they wanted to follow and the decisive leadership provided by the Prime Minister and the entire team, we have been able to achieve where we are today.

Sayed-Khaiyum also says the rest of the world is also opening up and we need to ensure we remain the destination of choice.

He also says they have presented a bill in parliament to ensure that we become price sensitive in things like the COVID testing space because people will also measure their trip cost based on the cost of the PCR and rapid tests. 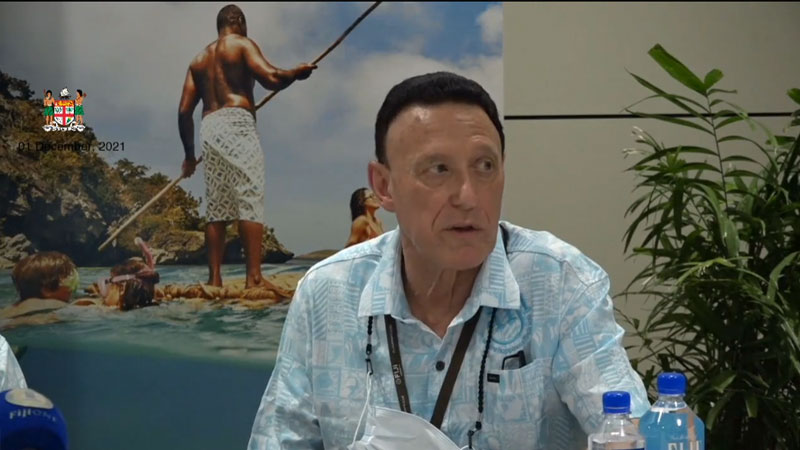 Sayed-Khaiyum also calls on those that are not vaccinated to get vaccinated. Fiji Airways Managing Director and CEO Andre Viljoen says the airline and the nation including the Government has been working hard since March last year to prepare for this moment.

Viljoen says the safety of their customers and staff will always be their highest priority.

He says they also have an extra measure at the airport where all travellers have to fill a declaration form to declare where they have been in the past 14 days.

Viljoen says their entire workforce is fully vaccinated, their new Travel Ready program is dedicated to medical safety and wellness, and Fiji Airways is the only airline in the Australia-Pacific region to achieve a Skytrax 5-Star Covid Safety rating as well as the highest Hospital Grade ‘Diamond’ certification by APEX Health and Safety.

Fiji Airways says Fiji already has multiple layers of health and safety protection protocols from COVID-19 and its potential variants in its border-reopening framework which was designed to even deal with situations like this.

It says Fiji Airways is committed to keeping travellers, citizens and staff safe as Fiji reopens its borders for tourists from travel partner countries.

He also says they are getting full flights from today.

With Fiji’s borders opening to international tourists today, the Ministry of Health anticipates their testing numbers to increase from international repatriates and travellers including Fijians visiting families and friends.

Permanent Secretary for Health, Doctor James Fong says with increasing COVID-19 cases in the European region, and the emergence of the new variant of concern, Omicron, noted to have several mutations, is a cause for concern.

Doctor Fong says their border health measures and surveillance will need to be strengthened and maintained.

He confirms the weekly testing numbers of over 4,000 are still above the WHO recommended rate of 4 tests per 1,000 population per week (or approximately 3,500 tests per week) and they anticipate continued surveillance and testing in the communities and maritime islands to monitor and detect cases for early intervention.

Around 75,000 bookings, tourists are also booking in resorts and hotels outside Viti Levu – HillBy Dhanjay DeoWednesday 01/12/2021 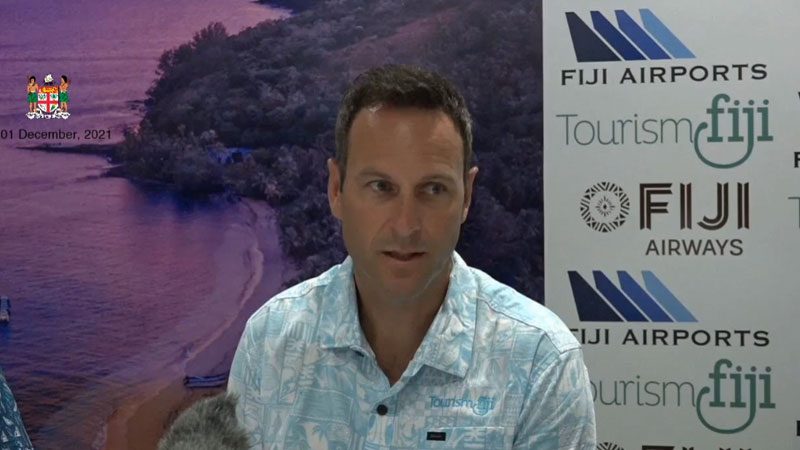 Tourism Fiji CEO Brent Hill says today is a huge day for tourism operators and it is outstanding to see around 75,000 bookings for the first couple of months.

While speaking in a press conference at Nadi Airport, Hill says if these 75,000 people spend an average of around $3,500, they are looking at over $255 million coming into the country.

He says this can happen if they stay the course and operate well throughout December and January.

Hill also reveals they are not only receiving family travellers but luxury and adventure travellers as well who are also making bookings in hotels and resorts outside Viti Levu.

Meanwhile, Fiji Airports Acting CEO Isei Tudreu says today is an important day for them as they have been waiting for 20 months to welcome visitors to Fiji. 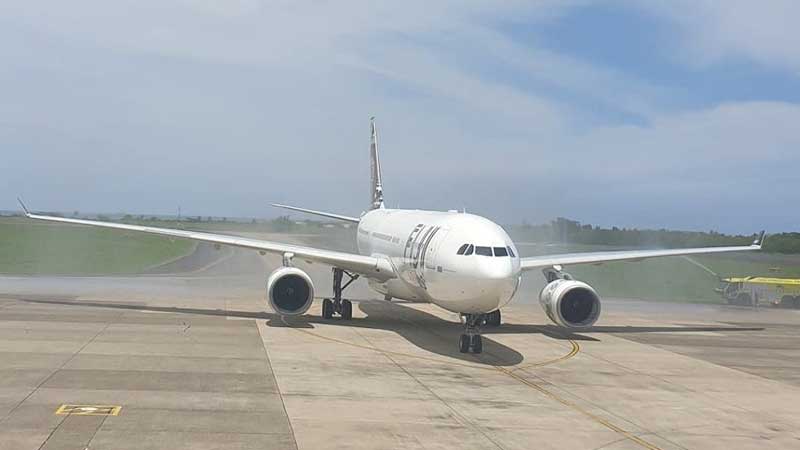 People flocked to Sydney International Airport this morning to catch the first flight into Nadi in more than 20 months, with the plane touching down just before 11.30am today.

Fiji Airways says it has also added an additional measure at the airport - a declaration form for all travellers to declare where they have been in the past 14 days.

news.com.au reports travellers’ reasons for escaping to Fiji were mixed, with some going to see family they hadn’t seen for years, but plenty of others were getting away to celebrate their honeymoons, wedding anniversaries and babymoons.

Ravneet Prasad, originally from Fiji, said he was desperate to see his family after not being able to go home for more than two years.

He said he is going to visit family and friends, and he has missed them a lot.

Prasad said hopefully they will be back before anything happens as the Omicron variant is a bit up in the air. He said they have planned for a week and a half but they have not paid their return fare.

Newlyweds Samuel and Melissa Kares, who were married last Monday, said their dream had initially been to get away to the Maldives but Fiji was a worthy replacement.

They say they are very happy with Fiji.

The couple said they weren’t too worried about the Omicron variant - just about the potential risk of hotel quarantine.

Melissa says they are just hoping when they go back to Australia it’s not too difficult with the lockdown rules but they are pretty lucky because they can work from home.

Joel Fitzgibbon and his partner Trizzia Zuluaga were making a last dash overseas as a couple before their baby is born.

The couple had no idea they were on the first flight out, admitting they had jumped at the chance after seeing an ad for Fiji Airways on social media.

The couple are only going away for a week and aren’t worried about the Omicron variant.

Trizzia says they think they should be safe in Fiji. She says they there’s a lot of testing in Fiji so they will just have to keep up with the news.

Alex and Bella Epshteyn were off to Fiji to celebrate their 26th wedding anniversary.

The couple said there was no point being worried about Omicron.

Most of the people news.com.au spoke with didn’t realise they were on the first flight to Fiji in more than 20 months, with many admitting they had simply jumped at the chance to get away.

Sofia Joseph, who was travelling with her 11-year-old son, said they are getting away for both a holiday and to see family.

She said they haven’t been on holidays since 2017 and since lockdown, they have worked so many hours.

Sofia said she works in the health sector so it’s a well-deserved holiday.

She said she had some fears about Omicron but their short trip meant she felt safe.

Australia became one of dozens of countries across the world to re-impose restrictions on international arrivals at the weekend after the variant of concern was identified in nine southern African nations.

All international arrivals not barred under new restrictions must isolate for 72 hours and await the results of a PCR test.

News.com.au says it was feared Fiji would take similar action against Australia, however, Fiji has already taken plenty of steps to ensure it stays Covid-safe.

More than 90.6 percent of Fiji’s eligible population is fully vaccinated against coronavirus and all arrivals are required to be fully vaccinated and have returned a negative PCR test within 72 hours of their flight.

Tourists are also required to stay in a COVID-approved resort, where they will then undergo a rapid antigen test for coronavirus within 48 hours of their arrival into Fiji.