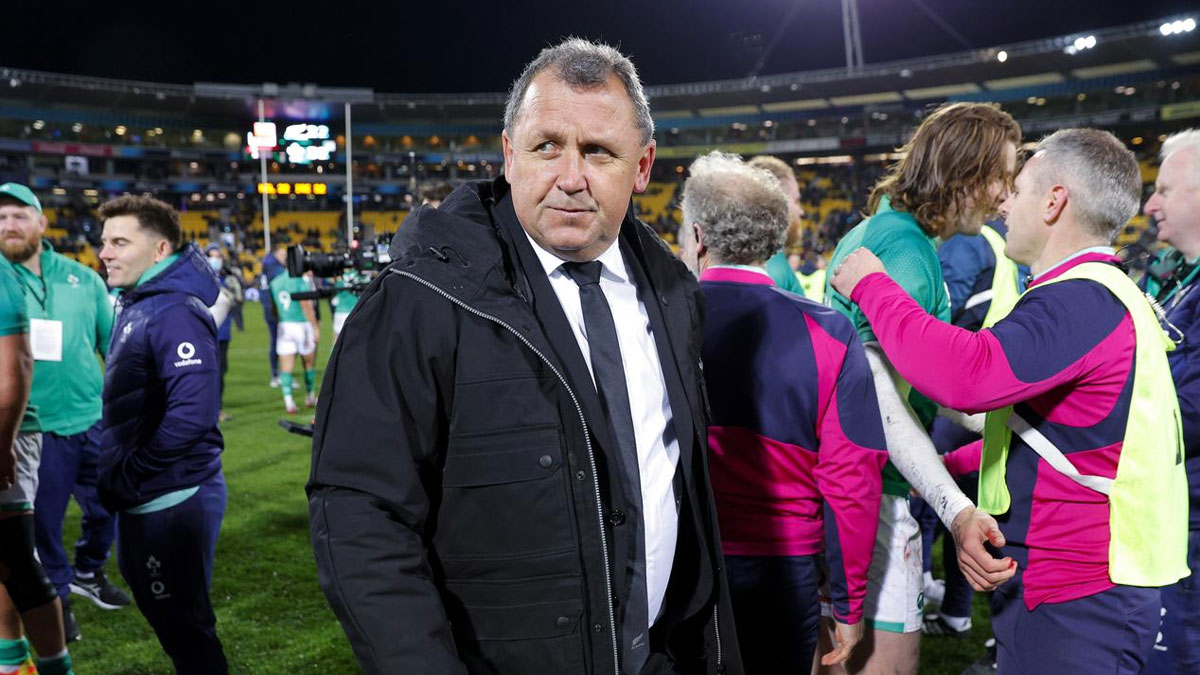 Ian Foster, if you read between the lines, has the opening two matches of The Rugby Championship against the Springboks to turn the All Blacks around.

Former All Black turned pundit Jeff Wilson told Sky Sports The Breakdown that the future is right in these two test matches in South Africa.

Wilson says if Foster loses both, it would be really hard to keep his job.

Since then, calls for sweeping changes have only intensified with New Zealand Rugby chief-executive Mark Robinson, Foster and captain Sam Cane all under the gun.

World Cup-winning coach Steve Hansen led the chorus of outrage, slamming the NZR board for abandoning the players while backing Foster to turn the ship around.

Others like respected pundit Stuart Barnes have called for Cane to be replaced as captain, believing the openside flanker wouldn’t make any of the top teams in the world let alone the All Blacks.

For the time being, the NZR and All Blacks are unmoved on all three positions. Fox Sports reports that should the All Blacks fail to win a Test over the Springboks, all three will struggle to hold their positions beyond the Rugby Championship.

The question many have is, how did the kings of rugby suddenly become a punching bag, with the NZR CEO, coach and captain all under the gun.

It was shortly after their World Cup triumph in 2015 that cracks first began to appear.

As respected pundit Rod Kafer highlighted, the All Blacks began to lose their humility after Richie McCaw and Dan Carter retired.

Kafer said one of the things he used to really admire about the All Blacks was genuine humility that they had, and he watched from afar and he got the sense that it might be a little bit forced at the moment.

Foster later refused to talk to Kafer ahead of the second Bledisloe Test in Auckland, after the former Wallaby said the reckless red card shot from Scott Barrett on Michael Hooper in Perth was intentional.

The arrogance continued when the NZR blew up Super Rugby, waved goodbye to its long-term ally South Africa and told their trans-Tasman neighbours they warranted just two franchises in its revamped competition following the onset of COVID-19.

But after a few defeats, the added pressure has seen the All Blacks walk away from their responsibilities to promote the game, as New Zealand commentator Scotty Stevenson, who penned Kieran Read’s autobiography, slammed the NZR and the All Blacks during a recent column for The Spinoff.

He wrote he has no desire to revisit the harebrained arrogance of the New Zealand national body which has, over the last decade, decimated club rugby, killed the National Provincial Championship, homogenised Super Rugby, burned Australia, Argentina and South Africa and told all who would listen, and many who didn’t really care, how much they were worth.

During the latter stages of Steve Hansen’s tenure the knighted coach began trying to squeeze as many talented players in as possible rather than selecting the best team to win.

Richie Mo’unga’s emergence saw Hansen question who was the best playmaker, as he went away from the pick-and-stick method previously used when Carter and McCaw had young guns trying to dislodge them.

It led the All Blacks to moving Beauden Barrett away from his preferred position in the No.10 jersey to fullback.

The midfield too was constantly changed, as the All Blacks experimented to try and find their answer to the hole left by Ma’a Nonu’s departure.

While in the back-row the All Blacks again played players out of position with Scott Barrett playing at blindside flanker instead of the second-row and Ardie Savea at No.8, with McCaw’s heir apparent Cane unmoveable at openside flanker.

Foster, who also was promoted to take over from Hansen despite many believing Crusaders coach Scott Robertson was the right person for the job, only clouded the situation further when he made Cane captain, thereby creating a David Pocock-Michael Hooper situation of their own as they disrupted the overall balance of the back-row by picking the two specialist flankers.

Kafer’s column in 2020 following the All Blacks’ draw against the Wallabies on home soil is even stronger almost two years on, as he forecast the rocky road ahead for Foster if he didn’t master the art of selection.

Since then, selection has remained a huge issue for Foster with a number of pundits increasingly hitting out at his picks, including that of Cane as captain.

Former captain Justin Marshall told SENZ radio recently that there are players that are in that team that probably shouldn’t be there.

Marshall said there are lots of equations in the mix, like what the hell is Caleb Clarke doing there if his hamstring was never going to be right for the series.

He also slammed the acceptance that the All Blacks are allowed to lose matches.

Marshall believes the national side’s uninspired form will have opposing countries “licking their lips” as for the first time in decades, the All Blacks are no longer invincible.

Carlos Spencer said the Wallabies would be quietly sniffing a Bledisloe boilover.

Spencer told foxsports.com.au. he thinks right now, the Wallabies would be confident of winning back the Bledisloe Cup.

He said New Zealand Rugby is not in a good place at the moment.

The All Blacks’ form woes have coincided with parts of the world waking up, including France.

Fabien Galthie’s side have been the brightest team since the 2019 World Cup and currently have the world’s best player, Antoine Dupont, running the show.

They are benefiting from a number of young talents coming through, while the core of the team are coming from sides like Toulouse.

They are also benefiting from a stronger emphasis of the pathways in the French Top 14 and not relying on overseas players to fill teams like previously.

The Leinster-dominated Irish side are also benefiting from the cohesion of playing together and the centralised program that has been put in place over the past decade.

At the same time, players from the southern hemisphere are increasingly being lured to the north for greater riches.

It has meant depth is being stretched and the best talent, players still in the prime of their careers, are no longer in their home countries and therefore being chosen.

The All Blacks currently sit fourth on the World Rugby rankings - the lowest in their history.

The All Blacks take on the Springboks at 3.05am Sunday.