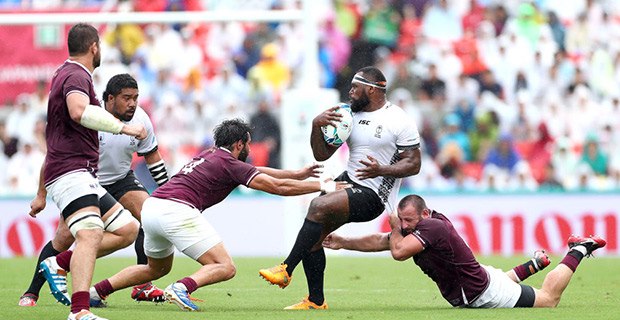 The Fiji Airways Flying Fijians have delivered a much needed 45-10 bonus point win to record their first 2019 Rugby World Cup win against Georgia at Hanazono Rugby Stadium in Osaka Prefecture in Higashiosaka City in Japan tonight.

This is Fiji's first win in the Rugby World Cup after two straight defeats against Australia and Uruguay.

Fiji is now second in Pool D with 7 points while Wales leads with 9 points.

It is important to note that Australia plays Uruguay on Saturday in their third game.

The win also means Fiji is in contention for direct qualification for the 2023 Rugby World Cup.

Seven tries were scored by the Flying Fijians in the match.

Fiji stepped up when it came to the scrum matching the Georgians as Fiji won 19 set pieces and had a 100% success rate in the scrum.

Waisea Nayacalevu scored the first try in the match in the 19th minute.

The conversion from Ben Volavola was successful.

This was followed by a penalty from Georgia in the 34th minute.

The Flying Fijians led 7-3 at half time.

Fiji opened the second half strongly with a try each by Frank Lomani and Josua Tuisova.

Fiji's amazing Cibi just gets better and better.#GEOvFIJ is going to be a belter.

Georgia then scored their only try in the match.

Semi Radradra scored a double in the second half and received the Man of the Match award.

Semi Radradra, @Mastercard Player of the Match for #GEOvFIJ

- Ran for 177 metres (most of the tournament so far)
- Had five clean breaks (most this match)
- Two tries (most this game)#StartSomethingPriceless #POTM #RWC2019 pic.twitter.com/NXAZs6UY7L

Other tries were scored by Api Ratuniyarawa and Semi Kunatani.

The Flying Fijians final pool match is against Wales at 9.45pm next Wednesday.

Handling errors, poor defence, and poor goal-kicking resulted in an embarrassing defeat for the Fiji Airways Flying Fijians as they were upset 30‑27 by Uruguay in their second pool match of the Rugby World Cup.

This is now one of the biggest upsets in Rugby World Cup history as Uruguay is ranked 19th in the world while Fiji is ranked 10th.

Crucial try conversions which would have given Fiji the win were missed by kickers Josh Matavesi and Ben Volavola.

Uruguay won eight turnovers in the first half, twice as many as Fiji.

Fiji scored the first try in the match through hooker Mesulame Dolokoto.

This was followed by another try by Eroni Mawi which was Fiji's only converted try.

There were also two tries scored by replacement halfback Nikola Matawalu late in the second half but it wasn't enough for the win.

Fiji had 59% possession in the match.

The Flying Fijians meet Georgia next Thursday at 5.15 pm.

A strong and impressive first-half performance from the Fiji Airways Flying Fijians stunned the Wallabies this evening but it was not enough to earn them a victory as they went down 39-21 at Sapporo Dome in Japan.

Fiji led on the scoreboard for most of the match and even delivered a 14-12 lead at halftime.

Fiji had 68% of the possession in the first half.

A yellow card to centre Levani Botia in the 61st minute affected the outcome of the match.

There were impressive individual performances from the Flying Fijians across the park as players such as Peceli Yato, Josua Tuisova, Semi Radradra, Frank Lomani and Waisea Nayacalevu stood out.

Huge power from Fiji! Follow the game LIVE, link in our bio.

The first points on the board by the Flying Fijians came from Flyhalf Ben Volavola through a penalty kick in the 4th minute.

Fiji’s first try was scored by Peceli Yato in the 7th minute.

Yato’s try was the result of great teamwork through open play as Josua Tuisova broke through the defence and kept the ball moving to Yato who managed to score in the corner.

The Wallabies first points on the board came from Captain Michael Hooper who scored in the 17th minute.

This was followed by two successful penalties by Volavola.

Fiji opened the second half strongly as Waisea Nayacalevu scored a try in the 43rd minute.

Nayacalevu intercepted a pass and ran more than 50 metres to score under the posts.

This was then followed by four tries and one penalty for the Wallabies.

Kerevi is the first Fijian born player to score a try against Fiji at the Rugby World Cup.

He was also awarded man of the match.

The Flying Fijians have only beaten the Wallabies twice.

Flying Fijians Captain Dominiko Waqaniburotu says they cannot blame anyone for their loss and now need to move on and focus on their next game.

Coach John McKee says they made some simple mistakes in the game.

The Flying Fijians next match is against Uruguay at 5.15pm on Wednesday.

In other matches, France and Argentina face off at 7.15 tonight while the All Blacks and Springboks clash at 9.45 tonight.

Italy will play Namibia at 5.15pm tomorrow, Ireland and Scotland face off at 7.45pm tomorrow while England clash with Tonga at 10.15pm tomorrow.