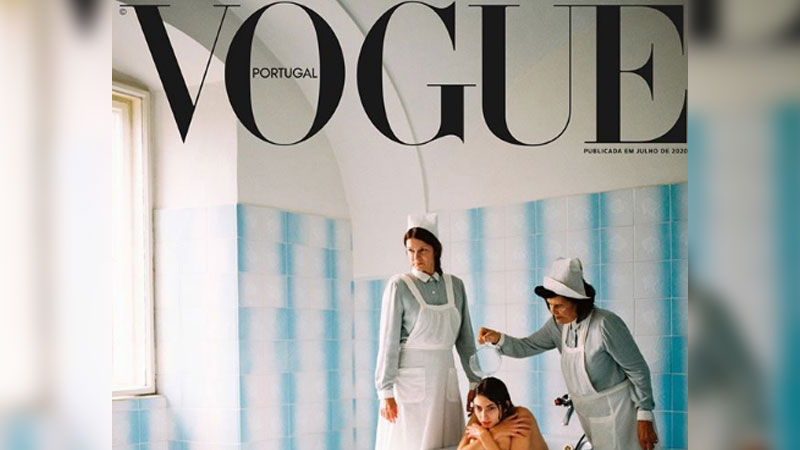 Vogue Portugal has responded to criticism over its depiction of mental health treatment on a recent magazine cover saying its aim was to "shine a light" on the important issue.

The "Madness Issue" features a woman in a bathtub in a hospital setting with a nurse pouring water over her head.

Mental health experts and sufferers said the cover depicted a "dystopian" and "outdated" idea of treatment.

Vogue Portugal said the image was intended to "start a discussion".

"The cover story explores the historical context of mental health and is designed to reflect real life and authentic stories," the publisher said in a statement posted on Twitter on Saturday.

"Inside the issue features interviews and contributions from psychiatrists, sociologists, psychologists and other experts," the statement added.

Portuguese model Sara Sampaio said images like the one portrayed on the Vogue Portugal cover "should not be representing the conversation about mental health".

Ms Sampaio, who said she had suffered with mental health issues herself, said she considered it "very bad taste".

"It looks like its in an [outdated] mental hospital" that used to "torture" patients, she said in a video posted on social media.

She added that it comes at a particularly sensitive time "because of Covid and the way that mental health has been dealt with" while many people have been isolated or directly affected by the deadly coronavirus pandemic.

A man who is alleged to have received stolen items is now in police custody. Officers from the Police Southern Division Taskforce managed to ... 27 minutes ago

The grandfather of the 13-year-old girl who was murdered in Namara, Labasa last month is pleading with the public to come forward if they have any ... 53 minutes ago